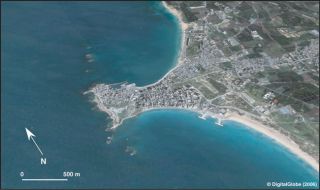 No man is an island, but it turns out all Alexander the Great needed to take over an entire island was a little help from Mother Nature. A half-mile-long spit of sand once linked the ancient Lebanese island of Tyre to the mainland, according to a new study of the area's geological history. Alexander used the natural sandbar to build a causeway, allowing his army to overwhelm the island stronghold during a siege in 332 BC. Alexander's conquest of Tyre has long been known to archaeologists, but they never understood how he managed to build a viable overwater passage to the enemy. The challenge probably troubled the Macedonian king at first too, said study leader Nick Marriner of the CEREGE-CNRS, a French geosciences research institute. "All previous settlements on his journey from Macedonia had capitulated with little resistance. Of course, these all lay on land," Marriner told LiveScience. "The fact that Tyre was an island bastion presented Alexander with a military headache: How was he to launch an effective attack?" Details of the study are in the latest edition of the Proceedings of the National Academy of Sciences. Sand spit ebbed and flowed An important ancient seaport, Tyre was occupied by a succession of cultures over the past five millennia, all of which clamored for position on the strategic island portion of the city. Water levels and wave action through the years changed the size of the island and its accessibility from the coastline. Today, a sand isthmus replete with development connects it to the mainland. Cores drilled into the isthmus reveal that the sand bridge also went through a huge growth period in the centuries just before Alexander's travels to Tyre, said Marriner. The natural bridge would have been the perfect platform for Alexander's expert engineers to build a functional causeway capable of withstanding an army, he said. And Alexander didn't stop there. "Diodorus Siculus, writing in the 1st century B.C., recounts that when the city eventually fell to the Macedonian armies, Alexander strengthened the mole [or sea wall] using rubble from destroyed quarters of the city," Marriner said. "In its most advanced stage, it is speculated the causeway reached an average width of 200 Greek feet, or about 60 meters [about 65 yards]." A model for the conquest of Alexandria Alexander's siege of Tyre wasn't historically important in itself, Marriner admitted, but its feat of engineering was the prototype for a more famous conquest in Egypt one year later. "Tyre presented a very similar geomorphological context (an offshore island sheltering a low-energy marine environment on its leeward side) to Alexandria ad Aegyptum, the famous city he was to found later in his campaign," he said. "Although Tyre was an important Mediterranean seaport, Alexander could have ignored it and fast-tracked to Egypt. This was more a show of military muscle than anything else."