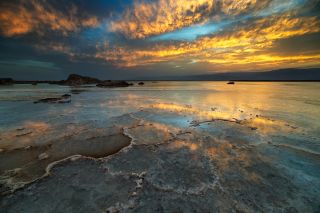 On its salty surface, the Dead Sea is famous for making giddy tourists float like beach balls. Hundreds of feet below the water, however, life is a little less fun.

There, choked by some of the saltiest water on Earth, single-celled microorganisms called archaea struggle to carry out life's basic functions without oxygen, light or fresh forms of sustenance. According to a new study published March 22 in the journal Geology, the survival of microbial life beneath the Dead Sea may have once even depended on eating the dead. [The 10 Strangest Places Where Life Is Found on Earth]

In their study, researchers from Switzerland and France analyzed long sediment cores drilled out of the center of the Dead Sea, and found evidence that ancient microbial life accumulated the energy it needed to survive by gobbling up bits of dead neighbors that couldn't hack the harsh conditions.

According to the researchers, these results open a window into Earth's mysterious deep biosphere — the subterranean world between Earth's surface and its core — where potentially millions of undiscovered microbial species thrive in improbably extreme conditions.

"The Dead Sea's subsurface environment constitutes one of the most extreme ecosystems on the planet," the authors wrote in their paper. "By studying an environment that pushes life to its limits, we catch a glimpse of the processes that fuel life in the deep subsurface."

Dead in the water

The Dead Sea (which is not really a sea, but a salt lake straddling the borders of Israel, Jordan and Palestine) begins about 1,400 feet (430 meters) below sea level, making it the single lowest place on land. The lake is also one of the saltiest: its waters are nearly 10 times saltier than the world's oceans, giving only the most salt-loving archaea a fair shot at survival.

To better understand the microbial history of this extreme ecosystem, the study authors investigated ancient sediment samples buried up to 800 feet (245 m) below the lake's surface. Inside these deep slices of lakebed, the team found traces of long-dead microbial life.

In the saltiest layers of the lake's underbelly, the team found lots of microbial compounds called wax esters — a type of energy-storage molecule that the world's smallest organisms can create when their survival is pushed to the limits. Think of it as a tiny carbon refrigerator — but, in order to turn it on, an organism needs to gobble up some of the fatty bits left behind by dead microbes that couldn't survive their harsh habitats.

Bacteria have been known to turn bits of their dead neighbors into wax esters before, but archaea don't seem to have this skill, the authors wrote. So, the team concluded, the wax esters found deep below the Dead Sea probably came from rough-and-tumble bacteria that had no choice but to feed on the corpses of dead archaea in order to survive their super-salty environment.

This is surprising, as bacteria were previously thought to be incapable of adapting to the lake's extreme ecosystem. However, by "recycling" bits of better-adapted microbes, that survival may have been possible in the past, the authors wrote. This may not only be true for the Dead Sea ecosystem, but could also apply to other severe environments scattered throughout the planet's vast underground biosphere.

"Our results illustrate the high adaptability of the subsurface biosphere and its ability to use varied strategies for energy production and preservation under adverse conditions," the authors concluded.

In other words, the Dead Sea might not be as dead as you thought.