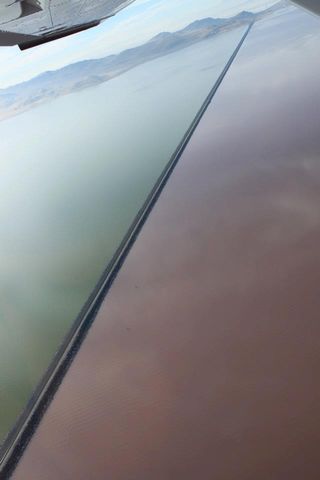 An aerial shot shows the causeway that divides the northern and southern parts of the lake. The rosy color of the northern waters is the result of the pigmented, salt-loving microbes.
(Image: © Courtesy of Great Salt Lake Institute)

So much salt is dissolved in the northern part of Utah's Great Salt Lake that its edges can become encrusted with crystals that sparkle against a treeless landscape and vast sky.

The salt concentration of the water hovers near saturation, reaching nearly 10 times the salinity, or salt content, of the oceans. These conditions are inhospitable to most life, except some salt-loving organisms.

At least a few of these make their presence known through the rosy hue they impart to the water and sometimes the salt. Pigments in these salt-lovers' cells, including carotenoids like those found in carrots, give the lake and its salt crust a distinctive pink hue.

This tinge commonly occurs in highly salty bodies of water around the world, said Bonnie Baxter, who directs the Great Salt Institute at Westminster College in Salt Lake City.

The pigment may offer protection from another extreme condition in this shade-less, high-elevation environment: ultra-violet radiation exposure, she said. [See Stunning Photos of the Great Salt Lake]

An inland sea, Lake Bonneville once covered much of what is now the state of Utah. When Lake Bonneville receded, it left behind what became known as the Great Salt Lake.

"I always see it as the puddle in the bottom of the bathtub that didn't drain," Baxter told OurAmazingPlanet.

Unlike most lakes, the Great Salt Lake has no outlet to the ocean; so the concentrated salt and minerals left by Lake Bonneville, as well as those carried in by its contributing rivers, have nowhere to go.

The salinity in the Great Salt Lake declines to the south, where perhaps the water's most prominent resident is the brine shrimp. Sometimes raised in aquariums as sea monkeys, they grow to 0.4 inches (10 millimeters) long.

But to the north, the super-saline water's most abundant residents are more primitive. Baxter and others have found a few fungi, some algae and bacteria, but mostly a type of extreme-environment–loving microbes called archaea.

A high-saltenvironment can be tough on living things because the salinity makes water leave cells. To avoid this fate, the lake microbes have salt pumps in their membranes. They also accumulate lipids, or fats, to counteract the pressure forcing water out of their cells. That ability makes them interesting as a potential source of biofuel, Baxter said.

The salt-loving archaea are nothing if not resilient. Some can hibernate for years within salt crystals.

Baxter and her students discovered the organisms' hibernating abilities after reviving microbes from crystals collected 10 years earlier. Baxter had been keeping these salt crystals in a tube on her desk to show to students, "not exactly the most protected environment," she said.

"That is where we are finding the most unusual ones," Baxter said of the microbes. "The ones that can dry up in salt crystals and hang out for years."