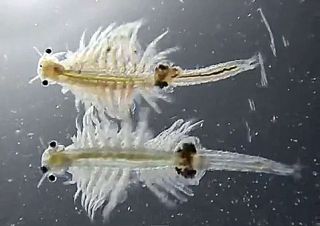 They're a product invented in the 1950s. They're an artificial breed of brine shrimp. They're creatures that spring to life the second magical dust touches water. They're a cult sensation. The question is, what aren't Sea-Monkeys?

Well, they're not monkeys. And they don't live in the sea.

Sea-Monkeys are a hybrid breed of brine shrimp called Artemia NYOS invented in 1957 by Harold von Braunhut. Initially marketed as "Instant Life," Sea-Monkeys are sold in hatching kits as novelty aquarium pets. An instant hit, they remain popular to this day.

The creatures, whose tails remotely resemble those of monkeys, are derived from crustaceans that undergo "cryptobiosis," meaning they can enter a state of suspended animation in times of adverse environmental conditions, and stay in that state indefinitely, until conditions improve.

This trait enables Sea-Monkeys' neatest trick: When you buy a packet of Sea-Monkeys, they appear to be lifeless dust. Pour the dust (which is actually brine shrimp eggs) in a tank of purified water, and the Sea-Monkeys spring to life. They grow steadily over the next few weeks, feeding on a diet of yeast and spirulina.

Sea-Monkeys are born with one eye, and pop out two more upon reaching maturity. They're translucent, and breathe through their feathery feet. They can reproduce sexually or asexually. They chase flashlight beams. In short, Sea-Monkeys are everything you could want in a brine shrimp pet, and more.