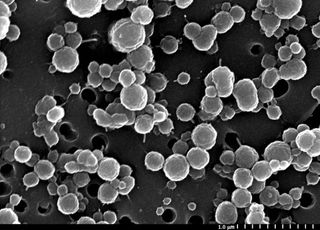 Beneath the icy surface of a buried Antarctic lake, in super-salty water devoid of light and oxygen that is also cold enough to freeze seawater, researchers have now discovered that a diverse community of bacteria has survived for millennia.

The findings shed light on the extreme limits at which life can live not just on Earth, but possibly alien worlds, scientists added.

Researchers analyzed Lake Vida, which lies encapsulated within ice at least 60 feet (18 meters) beneath Antarctica's surface. Past studies revealed the brine in the lake has been isolated from the surface for at least 2,800 years.

"That ice is so thick, nothing from the outside can get down to the water naturally,"researcher Peter Doran, an earth scientist at the University of Illinois at Chicago, said from a research outpost on Antarctica. [Strangest Places Where Life Is Found on Earth]

To examine the brine, the researchers used drills and heated pipes to delve downward. To avoid contaminating this isolated ecosystem, researchers set up a "clean room" on top of the hole, wearing the type of white suits used in electronics and germ labs to keep conditions as sterile and free of contamination as possible.

"Doing all this in the cold of Antarctica is pretty tough," Doran said.

The brine ranges from yellow to orange in color due to iron-laced compounds within it. The investigators found the temperature of the water was about 8 degrees Fahrenheit (minus 13 degrees Celsius) — its saltiness, about five to six times greater than average ocean water, keeps it from freezing like freshwater or seawater would. It is also completely depleted of oxygen and mildly acidic.

But despite the tough set of conditions, the researchers found the diverse and thriving community of microbes in the brine.

"What's most surprising is that there's anything living down there — it's a pretty harsh environment for life to take hold," Doran told OurAmazingPlanet. "There's a mantra that goes, 'wherever on Earth you find water, you find life,' and this is another one of those examples."

The brine had very high levels of carbon-based compounds, the building blocks of life. It also possessed high levels of chemicals that generally react with each other, such as nitrous oxide and molecular hydrogen, suggesting they were being regularly replenished — a surprising discovery, given how the lake was isolated for millennia from any obvious external sources of energy to help create them.

The overall chemistry of this brine suggests that chemical reactions between the water and the underlying sediment generated the reactive chemicals seen in the brine. The molecular hydrogen seen in the brine might serve as a fuel source to help support its microbial life, researchers added.

"By seeing what the boundaries of life are on Earth, that helps us when we go out and look for examples elsewhere," Doran said. "Years ago, we never would have thought to look for life in the sub-surface of Mars, and now we have examples on Earth that things can live down there."

Future research can explore Lake Vida's depth. "We'd like to collect samples of the bottom sediments down there, which can help us figure out this lake's history," Doran said. "When did it form? Was it always like this?"

Other teams of scientists are also drilling into other buried Antarctic lakes in search of signs of life that has been cut off from the world for millennia.

Doran, Alison Murray and their colleagues detailed their findings online Nov. 26 in the journal Proceedings of the National Academy of Sciences.