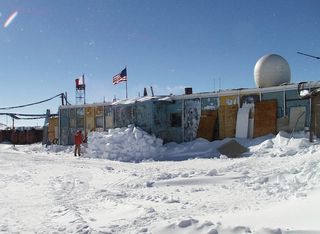 There was no native life in the first sample of lake water from the top of Lake Vostok in Antarctica, scientists reported this week at the 12th European Workshop on Astrobiology in Stockholm, Sweden.

An analysis of the microbes in the sample found four different types, based on DNA analysis, the journal Nature reports. Three of the four microbes matched contaminants from the drilling oil, with the fourth type unknown but also most likely from the lubricant, Nature reported.

The sample, from lake water frozen onto the drill bit, overall contained very few microbes (a few cells per milliliter) — comparable to background contamination levels, reported study author Sergey Bulat of the Petersburg Nuclear Physics Institute in Gatchina, Russia, in his abstract for the workshop.

Lake Vostok is a liquid freshwater lake the size of Lake Ontario, buried beneath more than 2 miles (3 kilometers) of ice for at least the past 14 million years. Scientists suspect the massive lake could house cold-loving microbes uniquely adapted to the darkness under the ice and cut off from the outside world for millennia.

The Russian team's ice-coring drill broke through the slushy layer of ice at the bottom of the massive ice sheetand reached water on Feb. 5, at a depth of 12,366 feet (3,769 meters).

Even if the top of the lake ends up being empty, Bulat suspects microbes will come from lower water depths, or from sediment samples at the bottom of the lake, Nature reported.

The team will return in 2013 to drill to lower levels in the lake, and the preliminary analyses of the first sample is still in progress, "leaving the possibility [that] life exists in the most upper water horizon of the lake," Bulat reported in the abstract.

A British team plans to begin drilling into Lake Ellsworth, another buried Antarctic lake, in December.