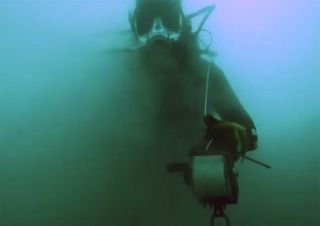 A diver, outfitted with special equipment designed to brave the salty conditions, is partially obscured by the murk of the Dead Sea.
(Image: © Christian Lott/ The Hydra Institute.)

For the first time, researchers have sent a diving expedition into the Dead Sea, where they uncovered freshwater springs issuing from massive craters in the seafloor, along with a menagerie of microbes.

Both finds were a first for the world's saltiest body of water, which is also the lowest spot on the planet. [See a video of the Dead Sea dive.]

The Dead Sea lies between Jordan, Israel and the Palestinian West Bank. Its salt-heavy waters allow humans to float effortlessly on the surface — a phenomenon that makes the Dead Sea a popular resort destination, yet notoriously challenging for divers attempting to swim down into the water.

A research team from Israel's Ben-Gurion University (BGU) of the Negev managed to dive down into the salty waters to confirm their suspicions that freshwater springs jet up from deep fissures in the seafloor.

The freshwater gushes from steep-walled craters about 45 feet (15 meters) across and 60 feet (20 meters) deep. The researchers found that the water forms a complex of springs flowing along the seafloor that is hundreds of feet long and 90 feet (30 meters) deep in some places.

In addition, the divers found mats of microbes living near the holes in the seafloor. The variety of the microorganisms living in an environment thought to be largely devoid of life was surprising, the researchers said.

"While there are no fish present, carpets of microorganisms that cover large seafloor areas contain considerable richness of species," said Danny Ionescu of the Max Planck Institute for Marine Microbiology in Germany, an institute that collaborated with the Israeli researchers on the recent expedition.

The Dead Sea is rapidly disappearing. Its waters evaporate at a rate of roughly 3 feet (1 meter) per year, largely due to humans choking off its main source, the Jordan River, to use for drinking water, according to the researchers.

BGU professor Jonathan Laronne and research student Yaniv Munwes, working with divers, devised the first system to directly measure the seafloor springs and study the structure of their upward flow.

"By developing a measurement system for these springs, we will be able to determine more accurately how much water is actually entering the Dead Sea," Laronne said in a statement.