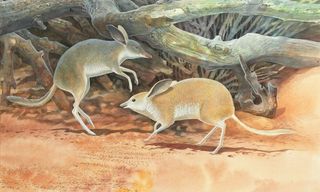 Scientists have discovered a new species of pig-footed bandicoot — an extinct Australian marsupial that looks like a kangaroo, an opossum and a deer got a bit too friendly at the local watering hole — and it's about as strange as you'd hope.

Pig-footed bandicoots are long-eared, long-tailed herbivores that once scurried about the sandy, arid stretches of central and western Australia for tens of thousands of years before going extinct in the 1950s. Maxing out with a body mass of about 1.3 pounds (600 grams; roughly the weight of a basketball) and a length of about 10 inches (26 centimeters), these mammals are considered to be among the smallest grazing animals that ever lived, according to the authors of a new study published March 13 in the journal Zootaxa.

With two functional toes on their front legs and only one on each hind leg, the bandicoots have a bit of an assembled-by-committee look. However, according to interviews conducted with aboriginal tribe members in the 1980s, the tripod toe arrangement did not hinder the little beasts from "galloping" at surprisingly high speeds when distressed. [Marsupial Gallery: A Pouchful of Cute]

The aboriginal interviews have been crucial to researchers as there are no pig-footed bandicoots left to study in the wild; only 29 fossilized specimens remain in the world's museums. In the new study, researchers from the Natural History Museum in London and the Western Australian Museum analyzed all 29 of those specimens, taking meticulous bone measurements and comparing DNA samples collected in the 1940s.

The results showed that these pig-footed bandicoot fossils represented two distinct species; previously, researchers thought there was only one type.

The newly described species, named Chaeropus yirratji after a local aboriginal name for the creature, has larger hind feet and a longer tail than its better-studied cousin (Chaeropus ecaudatus), and may have had different grazing behavior, the researchers wrote. Future understanding of the differences between the two species hinges on researchers being able to find more fossils, which tend to be buried in owl droppings on cave floors.