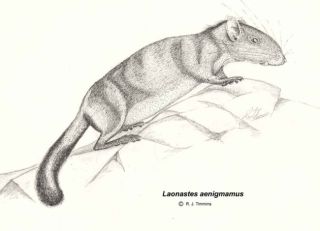 An illustration of the newfound creature.
(Image: © WCS)

In a rare addition to the animal family tree, scientists have discovered a new family of rodent.

It looks like a squirrel, sort of. But you can see rat-like features in its face. And in some ways it more closely resembles the guinea pig or chinchilla.

While new to science, the critter is well known in Southeast Asia. It is called Kha-Nyou by the locals in Laos.

Its discovery was rather unusual.

"It was for sale on a table next to some vegetables. I knew immediately it was something I had never seen before," said Robert Timmins of the Wildlife Conservation Society (WCS).

Other specimens caught by hunters were later identified by WCS researcher Mark Robinson.

DNA analysis and a comparison of the skull and other bones to other creatures suggest Kha-Nyou diverged from other rodents millions of years ago.

It has long whiskers and stubby legs, with a tail covered in dense hair. It prefers limestone outcrops and forests. The researchers think it is a vegetarian. Interestingly, it gives birth to one offspring at a time, rather than a litter. Bone fragments of the newfound rodent were dug out of an owl pellet, so it has at least one wily predator.

The discovery was announced today and is detailed in the journal Systematics and Biodiversity.

"To find something so distinct in this day and age is just extraordinary. For all we know, this could be the last remaining mammal family left to be discovered," Timmins said.