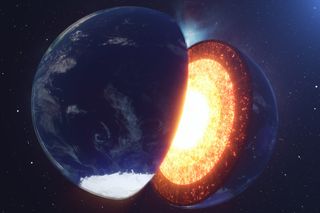 The deep part of Earth's middle layer is on the move.

New research finds that the lower mantle, located between 410 miles and 621 miles (660 and 1,000 kilometers) beneath the Earth's crust, is more dynamic than previously believed. This deep layer flows and deforms busily at subduction zones, where slabs of oceanic crust plunge down through the Earth's layers like sinking ships.

"Traditionally, it's been thought that the flow of rock in Earth's lower mantle is sluggish until you hit the planet's core, with most dynamic action happening in the upper mantle which only goes [down] to a depth of 660 km (410 miles)," study leader Ana Ferreira, a seismologist at University College London and the University of Lisbon, said in a statement. "We've shown this isn't the case after all in large regions deep beneath the South Pacific Rim and South America." [In Photos: Ocean Hidden Beneath Earth's Surface]

The Earth's mantle is made of hot rock, solid but easily bent and warped. The transition between the upper mantle and lower mantle sits 410 miles (660 km) beneath the surface. These two layers are distinct; the upper mantle, for example, is mostly made of the igneous rock peridotite, while the lower mantle is rich in the minerals bridgmanite and magnesium-iron oxide ferropericlase. The two layers also differ in temperature and pressure.

Ferreira and her colleagues set about investigating the uppermost part of the lower mantle using a computer model of Earth's interior created with 43 million real seismic measurements of the planet. Specifically, geophysicists use the natural echoes of earthquakes around the globe to image what's inside the planet. By looking at how the waves change speed and direction, researchers can glean information the different compositions of rock and mineral inside the mantle, giving clues about its structure and properties.

In the study, the researchers focused on what was going on in subduction zones, areas where oceanic crust dives below continental crust like a conveyor belt, recycling rocks and minerals deep into the mantle. These slabs plunge toward the core, crossing the boundary between the upper and lower mantle.

The results showed that at subduction zones, the lower mantle is surprisingly dynamic, particularly around the edges of the slabs of ancient crust plunging through its layers. The reason, the researchers found, seems to be something called "dislocation creep," which is the deformation of crystals and crystalline material caused by the movement of defects within the crystals. This creep is caused by the crustal slab interacting with the mantle rock, spurring the mantle to deform and (very slowly) flow.

The researchers found evidence for this creep below the Western Pacific and South America, so it's not yet clear how widespread it is. If the activity is global, it could suggest that Earth is cooling faster than previously estimated, study co-author Manuele Faccenda of the University of Padova said in the statement.

Though the mantle's flow may seem quite removed from what's going on in the crust, it determines quite a bit about the planet's environment, Ferreira said. Venus, for example, has a similar size and location in orbit as Earth, but its mantle likely flows very differently.

"How mantle flows on Earth might control why there is life on our planet, but not on other planets, such as Venus," she said.

The results appear today (March 25) in the journal Nature Geoscience.