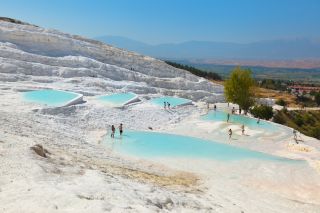 Travertine falls in Pamukkale, Turkey. Travertine sometimes forms when rock from the mantle, called peridotite, reacts with sea water or rain water, forming calcium carbonate. This chemical process could be sped up to trap carbon from the air in rocks, one scientist says.
(Image: © Tatiana Popova/Shutterstock.com)

If efforts to reduce carbon emissions fail and the world is barreling toward unchecked global warming, are there any last ditch strategies to save the planet? One possibility is to take all the carbon that came from the innards of the Earth and return it back to the planet, according to one scientist.

In theory, speeding up a chemical reaction that occurs naturally in rocks from the Earth's mantle could suck up trillions of tons of carbon dioxide (CO2) from the air, Peter Kelemen, a geophysicist at the Lamont-Doherty Earth Observatory, said at a presentation on Dec. 13, 2016 at the annual meeting of the American Geophysical Union in San Francisco. He recently returned from a four-month-long trip to Oman to sample some of this mantle rock, Voice of America reported.

"When rocks from the Earth's interior come up to the surface, they react very readily with the atmosphere and the ocean to take up CO2," Kelemen told Live Science. "If we could learn how that works and design systems that emulate that natural system, that would be one of the least expensive routes to carbon dioxide capture." [The Year in Climate Change: 2016's Most Depressing Stories]

A wide array of climate legislation is up in the air, from the Clean Power Plan to the Paris Climate Agreement. But many experts think that even the optimistic and aggressive emissions reductions targeted by the Paris agreement may not be sufficient to avert climate catastrophe, Kelemen said. At that point, the world will need to find carbon capture technologies to remove carbon from the air, Kelemen said.

Enter peridotite: a glossy, greenish-blue rock threaded with white that upwells from deep in the Earth's mantle. (The rock is often used as a fancy decorative element in facades – think of a bank lobby.) Normally, this mantle rock stays locked deep below the Earth, shielded from chemical reactions. [Photos: Dazzling Minerals and Gems]

But occasionally, collisions between tectonic plates thrust this rock upward. Because it is inherently chemically unstable, it reacts with seawater or rainwater and the atmosphere, sucking up carbon dioxide from the atmosphere, magnesium from the water and producing calcium carbonate, the white material that forms the veins in the rock. This natural process occurs all over the world, from New Caledonia and Papua New Guinea, to the underwater mountain Atlantis Massif (found at the Mid-Atlantic Ridge) to the Sultanate of Oman, where eons of rainwater have created a thick crust of calcium carbonate, called travertine, on the surface of peridotite rock.

"In the Sultanate of Oman there's enough of these rocks from the Earth's deep interior to take a trillion tons of CO2," Kelemen said. By contrast, human activities spew about 38 billion tons of carbon dioxide into the atmosphere a year, he added.

The problem is that peridotite naturally reacts with atmospheric CO2 too slowly to absorb meaningful amounts of carbon from the atmosphere.  However, "there are experiments that show you can accelerate that process by factors of thousands to millions," by increasing temperature and pressure, Kelemen said.

So Kelemen's team tried to devise the simplest method for speeding up that reaction — "just goosing it a little," Kelemen said.

They came up with a simple plan: First, drill tiny holes in rock buried beneath the sea. Next, pump cold, carbon-enriched water into those holes. As the water filters through the hot subsurface rock, the water would both heat up and be stripped of its excess carbon.

The hot water would then circulate and seep naturally out of the rock, eventually rising to the ocean surface. The thermal energy generated by this process could run the pumps, Kelemen said in his presentation.

On paper at least, the method pencils out economically: It requires the same type of equipment that oil companies already use for oil and gas drilling, and it would provide an additional revenue stream as well, he added.

However, the method is still theoretical, and there is no way to know whether it would work at the massive scale needed to offset the world's carbon emissions.

The idea is a promising strategy among many that are needed to address climate change, said Gregory Dipple, a geologist at the University of British Columbia in Vancouver, Canada, who was not involved in the current research.

"Reacting these kinds of rocks is going to be one of the solutions, absolutely," Dipple told Live Science. (Dipple uses a similar reaction to capture carbon from the air using crushed rocks that are left over from mining.)

Leftover rock from carbon could offset much of the carbon emissions of the mining industry, but won't make a dent in global emissions from other sources, Dipple said. So, Kelemen's plan is one that could fill that gap, he said.

One of the feasibility challenges will be keeping the rocks permeable to fluids as they are undergoing chemical reactions, Dipple said.