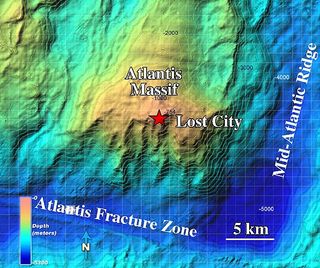 A topographical map of the Atlantis Massif, which also shows the location of its Lost City hydrothermal vents.
(Image: © NOAA.)

Scientists recently returned from an expedition to an unusual seafloor mountain, where they conducted what may be the first-ever on-site study of a type of rock that makes up a huge amount of our planet, but is largely out of reach.

Researchers aboard the research vessel JOIDES Resolution sent instruments to the Atlantis Massif, a seamount that lies near the Mid-Atlantic Ridge, a long volcanic rift bisecting the Atlantic Ocean, where two tectonic plates are being slowly shoved apart and fresh oceanic crust is created. (Seamounts are essentially a mountain that doesn't rise above the ocean's surface.)

Unlike most seamounts, which are typically made of volcanic rock, geological forces essentially yanked the Atlantis Massif from the Earth's gabbroic layer — the deepest layer of the Earth's crust, which rests directly on the planet's ever-shifting mantle.

Even though the dense, greenish rock constitutes the greatest volume of the ocean's crust, it has rarely been studied because it's so difficult to reach.

However, the Atlantis Massif has thrust the elusive rock within reach of drill-equipped ships, and the recent expedition simply used existing boreholes in the seamount to make their measurements.

A team of researchers lowered instruments to depths between 2,600 and 4,600 feet (800 and 1,400 meters) below the seafloor, and took data on temperature and the way that seismic waves — essentially, sound waves — move through two different types of gabbroic rock.

Getting an up-close portrait of the rocks' properties will allow scientists to better understand what they see when looking at data from future seismic surveys of geological structures buried deep below the seafloor.

"This is exciting because it means that we may be able to use seismic survey data to infer the pattern of seawater circulation within the deeper crust," co-chief scientist Donna Blackman, of the Scripps Institution of Oceanography in La Jolla, Calif., said in a statement.

"This would be a key step for quantifying rates and volumes of chemical, possibly biological, exchange between the oceans and the crust," she said.

The expedition was sponsored by the National Science Foundation and the Japanese government.