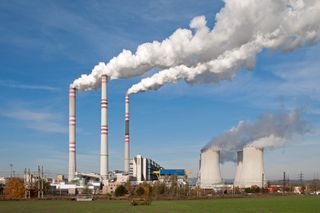 The X Prize Foundation is calling green innovators from around the globe to compete in its latest contest. To win the Carbon X Prize, teams must create usable products out of carbon dioxide gas — the same gas that's spewed from power plants and anywhere fossil fuels are burned.

"The winning team will convert the most CO2 [carbon dioxide] emissions into the highest-value products," Paul Bunje, principal and senior scientist of Energy & Environment at X Prize, said in a statement. "To be competitive, teams will have to make the business case for their approach as well as minimize their use of energy, water, land and other inputs that have consequences for the environment."

Carbon dioxide is a heat-trapping gas that is also the main cause of global warming, scientists agree. The more coal-based energy humans consume, the more greenhouse gases like carbon dioxide enter the atmosphere and heat up Earth. The effects of global warming are already showing up, from accelerated melting of ice sheets, to more intense and frequent storms, to wildlife having to move their ranges north as they try to beat the heat. [8 Ways Global Warming Is Already Changing the World]

"Some people may believe that any solutions we find will be too late to make a difference, but that attitude runs counter to the spirit of innovation and optimism that has driven human and economic development for centuries," Bunje said. "With the right amount of passion, focus and investment, we can and we will find the portfolio of solutions necessary to address climate change."

Whereas there have been big innovations in carbon-capture technology, in which CO2 from fossil-fuel power plants is taken from fossil fuels and stored so it's not released into the atmosphere, there has been little research that focuses on turning carbon dioxide into useful products, such as a fuel or new material, according to the X Prize Foundation.

"There is work, mostly in research, to turn carbon dioxide into fuels, cements and other materials like graphene and carbon nanotubes," Bunje said. "Our goal is to take [this type of innovation], really accelerate it and get it to the scale that's really necessary. To not just research how to do this, but actually employ it."

And X Prize representatives are hoping all innovative minds will step up.

"We have this phrase we use internally [at X Prize]: innovation can come from anywhere. Anywhere on the planet and from any type of background," Bunje told Live Science.

In addition to the usual suspects — scientists and innovators from start-up companies — Bunje and his colleagues also expect that garage innovators — people who've just been tinkering around on their own — will participate in the Carbon X Prize challenge. In the past, high school students have made a showing in X Prize competitions.

If you think you have something to contribute to a team to find a workable technology, even if it's not a fully formed idea, it's worth throwing "your hat into the ring," Bunje said.

Innovators who decide to compete can choose between two tracks: converting emissions from either a natural gas power plant or a coal power plant. The first phases involve getting teams together for the competition, then each team will work on and submit their technology and business plans to the X Prize judges.

Based on the teams' submissions, judges will then conduct the first round of eliminations. Only the top fifteen teams for each track will move on. A 12-month pilot-scale competition will follow, during which the remaining teams will build their technologies. Next, the judges will pick the top five contenders for each track. These top teams will receive a $5,000 prize and continue on to the final round, where they will scale up the original technology to an industrial level, to demonstrate how the technology uses carbon dioxide emissions from a power plant, straight from the source, and turns those emissions into the final product.

The winners for each track will be awarded $10 million.

Called the "$20M NRG COSIA Carbon XPRIZE," the competition is sponsored by COSIA, Canada's Oil Sands Innovation Alliance, and NRG, a company that aims to deliver cleaner and smarter energy for the U.S. energy industry.

X Prize, an organization dedicated to creating incentivized prize competitions to encourage innovators who want to change the world for the better, has organized several such competitions in the past, including the Wendy Schmidt Oil Cleanup XChallenge and the Progressive Automotive X Prize. Registration for the Carbon X Prize has officially opened, and will close in June 2016. Interested parties can sign up on the X Prize website. The competition will run until March 2020, when the grand prize winner will be announced.