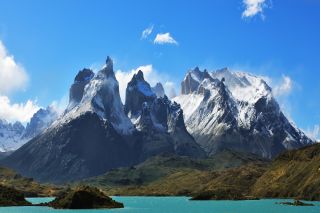 The Cuernos del Paine in Chile are part of the Andes Mountain range.
(Image: © Shutterstock)

Far from a process of smooth, inevitable ascendance, the formation of the iconic Andes Mountains was downright explosive. As the peaks rose skyward along the western coast of South America dozens of millions of years ago, violent volcanic activity rocked the continent , a new study finds.

Researchers made the discovery by studying the buried remnants of the continent's tectonic plates. And what the scientists found surprised them.

The 4,300-mile-long (7,000 kilometers) Andes — the longest continuous mountain range in the world — didn't form in the way that scientists had long thought. Previously, geologists held that the Nazca oceanic plate, which lies under the eastern Pacific Ocean, had steadily and continuously subducted (slipped under) South America, which made the ground rise and eventually create the towering Andes. [Photos: The World's Tallest Mountains]

"The Andes Mountain formation has long been a paradigm of plate tectonics," study co-author Jonny Wu, assistant professor of geology at the University of Houston, said in a statement.

But after studying the underground remnants of the Nazca oceanic plate, which sit about 900 miles (1,500 km) underground, the researchers learned that the plate did not go through a steady and continuous subduction. Rather, the Nazca plate was at times torn away from the Andean margin (the place where it was subducting), which led to volcanic activity, the researchers said.

To double-check their work, the scientists modeled volcanic activity along this margin.

"We were able to test this model by looking at the pattern of over 14,000 volcanic records along the Andes," some of which date back to the Cretaceous, Wu said.

The remains of the subducted Nazca plate are far underground, so how did the scientists study them?

When tectonic plates move underground — that is, when they creep under Earth's crust and enter the mantle — they sink toward the core, much like fallen leaves sinking to the bottom of a lake. But these sinking plates retain some of their shape, offering clues to what the Earth's surface looked like millions of years ago. In the case of the Nazca plate, more than 3,400 miles (5,500 km) of lithosphere, the outer, rigid part of the crust and upper mantle, was lost to the mantle, the researchers said.

Scientists can image these plates using data collected from earthquake waves, much like a computed tomography (CT) scan allows doctors to see the insides of a patient.

"We have attempted to go back in time with more accuracy than anyone has ever done before. This has resulted in more detail than previously thought possible," Wu said. "We've managed to go back to the age of the dinosaurs."

In the case of this study, after analyzing these underground tectonic leftovers, the researchers were able to piece together how the Andes formed. The subducting Nazca plate slammed into a transition zone, or a discontinuous layer in the mantle, which slowed the plate’s movement and caused buildup above it, the researchers said in the statement.

"Thus, contrary to the current paradigm, Nazca subduction has not been fully continuous since the Mesozoic but instead included episodic divergent phases," the researchers wrote in the study.

The study was published online today (Jan. 23) in the journal Nature.