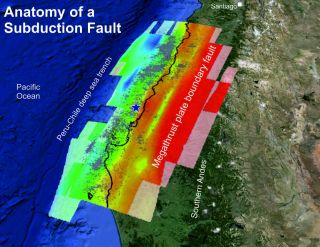 Two blobs of dense rock jammed deep beneath Chile's coastline acted like seismic speed bumps during the magnitude-8.8 Maule earthquake in 2010, according to a new study.

Some of the world's largest earthquakes occur in Chile. The country sits above a subduction zone, where the Nazca tectonic plate dives down under the South America tectonic plate. Where the two plates lock together, a huge amount of strain builds up and is periodically released through earthquakes.

Ridges and undersea mountains on the Pacific Ocean seafloor (the Nazca plate) divide the coastline into segments that unleash earthquakes at different intervals, scientists think. After the subduction zone gobbles these seafloor barriers, they can stop earthquakes from moving through an area or serve as earthquake starting points. [Image Gallery: This Millennium's Destructive Earthquakes]

Now, researchers have discovered similar quake-controlling behavior from unusual geologic features bolted to the underside of the South American continent like a wad of chewed gum. The dense rocks seem to have played a key role during the devastating Maule earthquake, according to results published Nov. 1 in the journal Earth and Planetary Science Letters.

"The properties of the subduction zone offshore Chile change from south to north, and before now a lot of the focus has been on the role of features on the oceanic plate," said Stephen Hicks, lead study author and a seismologist at the University of Liverpool in the United Kingdom. "I think for the first time we are able to say how the structures in the overriding plate, the South American continent, play a big role."

After the Feb. 27, 2010, earthquake off the coast of central Chile, an international consortium scattered the seafloor and land with seismometers that recorded more than 40,000 aftershocks in just nine months. The data provides a much more detailed picture of the different kinds of rock being squeezed into the subduction zone than had been previously available.

In the new portrait of Chile's underground structures, Hicks and his colleagues saw two dense zones above the contact between the two tectonic plates. (The density is estimated from the earthquake wave speed.) The rocks are found about 78 miles (125 kilometers) east of the offshore trench that marks the modern subduction zone, and 19 to 27 miles (30 to 44 km) below the surface.

The structures are most likely made of a type of mantle rock called peridotite, Hicks said. The mantle is the hotter layer of rock beneath Earth's thin, cool crust. The mantle rocks were probably stuck onto the bottom of the South American continent some 250 million to 220 million years ago, when the subduction zone was further east, he said. Directly above the anomalies, on the surface, are outcrops of rocks with similar mafic compositions and ages. "This is where the old volcanoes were located," Hicks told Live Science.

The 2010 earthquake started near the edge of the larger Cobquecura anomaly, the researchers report. Most of the quake's movement, or slip, was along shallower parts of the subduction zone fault. When the fault tried to zip through the zone where the mafic rocks were locked to the Nazca Plate, the rupture suddenly slowed down. Such speed bumps can generate damaging fast shaking during an earthquake (whether the quake is quickening or slowing down). In the case of the Chile earthquake, the slowdown pattern matched up with the areas that felt the fastest shaking.

"Where these blocks are located is where the most high-frequency energy is coming out," Hicks said.

The Maule earthquake killed more than 520 people, injured 12,000 more and damaged or destroyed more than 370,000 homes, according to the U.S. Geological Survey.

Because every subduction zone is different, the findings may not necessarily help researchers forecast high-frequency shaking at other subduction zones. And the incredibly detailed imagery was only available thanks to high-cost ocean bottom seismometers and the aftershock swarm triggered by the huge earthquake, Hicks said.

"It would be nice to say something about the way future earthquakes might happen, but each subduction zone has undergone a different tectonic history," Hicks said. "It would be a huge investment to get more of these kinds of instruments out there, but the results can be absolutely fascinating."