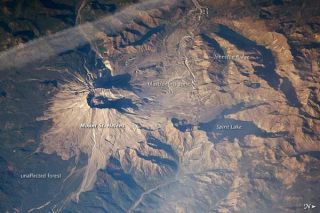 By peering at crystals encased within volcanic rock, scientists could get a better idea of when eruptions will occur, researchers say.

More than 500 million people live close to volcanoes that could erupt with little or no clear warning, causing widespread devastation and even global effects on climate, as in the case of the 1991 eruption of Mount Pinatubo. Although scientists keep an eye on many of the world's volcanoes for ground movements, gas emissions and other signs of unrest, volcanologists still face challenges directly linking surface activity with volcanic plumbing changes deep underground.

To learn more about volcanic activity in an effort to help predict it, researchers investigated the magma from within volcanoes. Crystals often grow within magma chambers, large crevices of searing hot fluid rock beneath volcanoes.

"Crystals can be thought of like a book," said researcher Kate Saunders, a volcanologist at the University of Bristol in England. "If we understand how to read them, they contain vital information on formation of the magma." Changes in magma behavior recorded in crystals might in turn shed light on volcanic activity. [World's 5 Most Active Volcanoes]

Crystals within magma often grow in concentric zones. This makes them like tree rings — thin ones reflect times of little growth, while thick ones represent much growth. Each zone also has a subtly distinct chemical makeup that mirrors changes in physical conditions within magma chambers, thus giving clues on internal volcanic activity.

Saunders and her colleagues analyzed orthopyroxene crystals within volcanic rocks taken from nine different eruptions at Mount St. Helens in Washington state, from 1980 to 1986. The volcano is best known for its spectacular eruption in 1980.

The researchers discovered the rims of the crystals typically grew within 12 months of each eruption. Peaks in crystal growth were linked with increased earthquake activity and flow of sulfur dioxide gas at the volcano.

"Such a correlation between crystal growth and volcanic seismicity has been long anticipated, but to see such clear evidence of this relationship is remarkable," Saunders told OurAmazingPlanet.

Although this work cannot lead scientists to predict the time and day of an eruption, "the more we understand the internal workings of a volcano, the better idea we have," Saunders said. "You wouldn't ask a doctor to predict the exact time of someone's death. However, by monitoring a patient's vital signs, they are able to provide a much more thorough diagnosis.

"The same is also true with volcanoes. The more we know about the processes that occur beneath them and the time scales over which these occur, the better we can anticipate their behavior and timing of future eruptions."

The researchers hope to examine other volcanoes and compare their results with other volcano-monitoring techniques.

The best plan, Saunders said, may be to collect rocks from eruptions "50 years, 100 years, 1 million years ago and interrogate these samples to investigate whether the volcano is behaving in a similar predicable manner and whether we can use this knowledge to help us to watch for similar signs in the monitoring record."

Saunders and her colleagues detailed their findings in the May 25 issue of the journal Science.