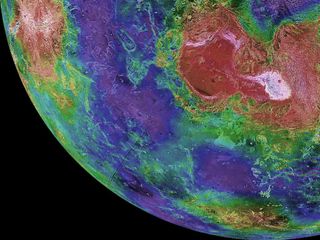 This hemispheric view of Venus was created using more than a decade of radar investigations culminating in the 1990-1994 Magellan mission, and is centered on the planet's North Pole. This composite image was processed to improve contrast and to emphasize small features, and was color-coded to represent elevation.
(Image: © NASA/JPL/USGS)

Each Friday this summer, Life's Little Mysteries, a sister site to LiveScience, presents The Greatest Mysteries of the Cosmos, starting with our solar system.

Although the second planet from the sun is named after the Roman goddess of love, Venus is anything but lovely, at least from a hospitality perspective. For starters, its surface temperature pushes 900 degrees Fahrenheit, making Venus the hottest planet in the solar system.

It gets worse: A thick shroud of carbon dioxide presses down with 92 times the pressure of Earth's atmosphere on a bone-dry landscape. The opaque clouds that block our view of the world's surface are laced with sulfuric acid.

As you might imagine, studying Venus has proved difficult. But bit by bit, scientists are learning more about Earth's closest planetary neighbor. Here are some of the biggest mysteries regarding the brightest object in our sky after the sun and the moon.

Venus is sometimes referred to as Earth's "evil twin." In terms of size, composition and orbital location, hellish Venus is actually the planet that's most similar to our own (that we know of). Early in Venus' history, scientists think, the world was probably a lot like Earth, with oceans and a much cooler climate. [What If the Earth Were Twice as Big?]

But over a few billion years, a runaway greenhouse effect seems to have taken over. Venus is about a third closer to the sun than Earth, and so it receives twice the amount of sunlight. This extra heat caused greater evaporation of initial surface water. In turn, the water vapor trapped more heat, further warming the planet, triggering more evaporation, and so on, until the oceans were gone.

"This is a mechanism that makes sense to get from an early earthlike Venus to the Venus we know today," said David Grinspoon, curator of astrobiology at the Denver Museum of Nature & Science and an interdisciplinary scientist on the Venus Express mission, a spacecraft that has been orbiting Venus since 2006.

Figuring out exactly when and how Venus became a furnace will help with modeling Earth's changing climate, as well as avoiding the possibility of sharing Venus' fate.

Venus turns on its axis much more slowly than Earth — a single Venusian day lasts 243 Earth days, which is longer than Venus' year, which takes 224 Earth days. Belying this gentle pirouette, the winds at Venus' cloud tops can reach 220 miles per hour (360 kilometers per hour), or about 60 times the pace of the planet's turning. (Winds are caused in part by planetary rotation.) Proportionally, if the same gusts blew on Earth, equatorial cloud winds would reach an astonishing 6,000 miles per hour (9,650 kilometers per hour).

The driver of Venus' atmospheric super-rotation must ultimately be energy from sunlight, Grinspoon said, but the full workings of the phenomenon remain unknown.

All of the planets in the solar system orbit the sun in a counterclockwise direction when viewed from the sun's north pole, and nearly all spin in this same direction on their axes. Not so on Venus, which has retrograde rotation (Uranus does this, too). On Venus, in other words, the sun rises in the west and sets in the east.

This clockwise spin is probably the result of a cosmic collision early in Venus' history. Many large bodies hurtled about the young solar system then, and such an impact to Earth is thought to have gouged out the material that formed the moon. Further understanding of the structure and composition of Venus with data from future lander probes should reveal what it was that sent the planet into its backward revolution.

It's still an open question if lightning indeed zaps from the Venusian clouds. Although the Venus Express spacecraft has "heard" the electromagnetic static that lightning characteristically produces on Earth, cameras have yet to capture a clear optical flash coinciding with these readings, Grinspoon said.

How this lightning might form is also mysterious. On Earth, a key role is played by ice crystals inside clouds, an ingredient that is in short supply in the hyper-arid atmosphere of Venus.

Although it's a long shot, Grinspoon said, there is a plausible argument for Venusian life — not on the planet's superheated surface, but in the clouds. Some 30 miles up, there should be a habitable niche where pressure and temperature are earthlike. For energy, floating creatures resembling bacteria could use ample sunshine or chemicals in the clouds. Of course, these beings would have to tolerate sulfuric acid, but so-called extremophiles on Earth have shown that life can thrive in even the harshest environments. [Could Extraterrestrials Really Invade Earth, and How?]

"It's worth exploring the clouds for many reasons," Grinspoon said, "and one of them is the possibility of some kind of exotic life."