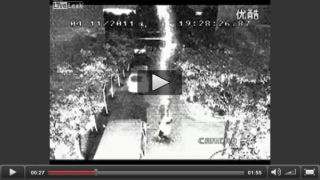 A new viral video shows a man getting struck by lightning during a rainstorm. The bright flash knocks him flat and scorches the ground beneath him. For about a minute, he's out cold. Then his leg twitches, he comes to, rolls over, stands up and walks away. A few seconds later, he is struck again. And, again, a few seconds after that, he recovers.

However, lightning experts say the video, which appears to be security camera footage, is very likely a hoax.

The first sign that the video might be fake, according to Vladimir Rakov, electrical engineer and co-director of the University of Florida Lightning Research Group, is that people almost never survive direct lightning strikes like the one shown in the video. "The chance of survival in the case of a direct strike is essentially zero," Rakov told Life's Little Mysteries, a sister site to LiveScience. That's because lightning bolts emanating from storm clouds convey a gigajoule of energy, he explained -- which is about enough to melt a ton of steel.

The vast majority of the 240,000 people who survive lightning strikes worldwide each year do not actually get hit directly. "They are struck by 'side flashes,'" Rakov said. "Lightning might strike a building near them, for example, and there's a side flash that jumps to them carrying a small fraction of the original lightning bolt's energy. In that case, they can survive and even walk away."

Side flashes are much less powerful than direct strikes, but they nonetheless convey a huge amount of energy. How do people survive getting struck by them? It turns out most of their electric charge passes in an arc around a victim's body.

"This is called a flashover. The full lightning current doesn't flow through the human body, because bodies have an extremely high impedance," Rakov said. Because the person's body essentially resists the flow of current, an electric arc will form from the person's head to the ground. "Most of the current will flow along that arc over the surface of his body," Rakov said. "Only 5 amps typically flow through him." Five amps -- enough to run an electric heater -- is a significant but usually nonfatal amount of current.

While it's extremely rare that someone survives a direct lightning strike, those who do can typically thank this same flashover effect. People wearing slick wet raingear with the hood up, for example, have been known to survive getting struck when the current travels around them through their raingear rather than down through their bodies.

The man in the video seems to receive direct lightning strikes rather than side flashes. "If it were a side flash, there should have been some indication of the direct flash which produced the side flash," said Bill Rison, an electrical engineer and lightning physicist at New Mexico Tech.

So is this an extremely rare case of a man surviving two direct lightning strikes? Probably not, the experts say. . Instead, this may be a doctored video. "Each flash appears in only one frame of the video, with no saturation or blooming of the camera," said Rison, who specializes in designing lightning observation equipment "A lightning flash at nighttime, when the lens is wide open, would probably saturate the camera." If the video were real, then rather than appearing in one brightly lit frame, each bolt would cause the video to go white for a few frames.

"The images look very realistic, but the sequence of events is very hard to believe to be actually occurring," Rakov said. Martin Uman, an electrical engineer also at the University of Florida Lightning Research group, concurs. "There were trees and a bus to the left of the guy in the first strike that would likely have been hit instead of him," Uman said. "The video is probably a fake."

How might the video have been created? "It could have been simulated with footage of laboratory discharges overlaying the footage of the person walking," Rakov suggested.