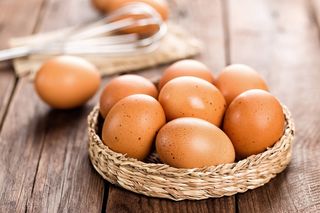 Eggs are back in the news, with a new study concluding that regular consumption of the beloved breakfast food may increase the risk of heart disease after all.

The large, long-running study — published today (March 15) in the journal JAMA — found that eating three to four eggs per week was linked to a 6 percent increase in a person's risk of developing heart disease and an 8 percent increase in their risk of dying from any cause during the study period, compared with not eating eggs.

The authors of the new study, from Northwestern University Feinberg School of Medicine, conclude that Americans should limit their cholesterol and egg consumption, and that current dietary guidelines for cholesterol may need to be reevaluated.

So what does this mean for the beloved breakfast food? Indeed, at 186 milligrams of cholesterol per egg yolk, eggs are one of the highest cholesterol foods typically consumed by Americans. [7 Tips for Moving Toward a More Plant-Based Diet]

To find out where Americans should stand on "eggs for breakfast," Live Science reached out to several experts who weren't involved with the new research.

The trouble with cholesterol

"There's always been a [suggestion in the data] that eggs can raise cholesterol and create cardiovascular harm," said Dr. Andrew Freeman, director of the Cardiovascular Prevention and Wellness program at National Jewish Health hospital in Denver. "The evidence is pretty clear that animal products, and high-cholesterol products, should be limited" in the diet, Freeman told Live Science.

Although some previous studies have failed to find a link between eggs, along with other forms of cholesterol consumption, and heart disease risk, the new study was able to thoroughly adjust for other foods in a person's diet in order to focus on the effect of eggs and cholesterol.

"This study does a good job of parsing the data and identifying dietary cholesterol as an individual and independent component of diet" that's linked with heart disease and mortality, said Dana Hunnes, a senior dietitian at the Ronald Reagan UCLA Medical Center in Los Angeles.

The apparent back-and-forth on egg recommendations has meant that "this had become a confusing topic to discuss with patients," said Dr. Seth Martin, a cardiologist and associate professor of medicine at Johns Hopkins University School of Medicine. "It is nice to get clearer data on this controversial topic to better inform future guidelines and our patients," Martin said of the new study.

Some of the confusion around cholesterol in the diet stems from two seemingly contradictory statements that appear in the 2015 dietary guidelines. On the one hand, the guidelines say that "cholesterol is not a nutrient of concern for overconsumption;" but on the other hand, the guidelines say that "individuals should eat as little dietary cholesterol as possible while consuming a healthy eating pattern." [9 Disgusting Things That the FDA Allows in Your Food]

Freeman cited concerns about the influence of the agricultural and food industry over the guidelines as a reason for this contradiction, and the general downplaying of the link between dietary cholesterol and heart disease.

Hunnes agreed. "The USDA oversees both agriculture — including [the] egg industry — and dietary guidelines. They are not free from industry bias," she said.

Still, the findings don't mean that you have to shun eggs all together. As with any food, "everything in moderation" remains good advice, said Dr. Satjit Bhusri, a cardiologist at Lenox Hill Hospital in New York City.

Limiting cholesterol may be particularly important for people already at risk for heart disease.

"Given the volume of heart disease and death from chronic diseases … in our country, I think that consuming fewer eggs on a weekly basis would behoove most people, and especially those with other [health conditions] and/or chronic diseases to start out with," Hunnes said in an email.

The authors pointed out that most of the cholesterol found in eggs is in the egg yolk, so egg whites are still on the table.

It's important to note that the study found only an association, and it cannot prove that eggs or cholesterol directly cause heart disease. In addition, the study assessed people's diets at a single point in time, not accounting for changes in a person's diet that may have occurred during the study period.