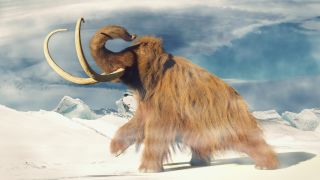 An illustration of a woolly mammoth
(Image: © Shutterstock)

A handful of 28,0000-year-old woolly mammoth cell parts were recently "woken up" for a short time in a new experiment, but cloning the ice age beasts is still a long way off.

In the experiment, the researchers extracted cells from Yuka, a woolly mammoth mummy (Mammuthus primigenius) whose remains were discovered in the Siberian permafrost in 2011. Then, the scientists recovered the least-damaged nuclei (structures that contain genetic material) from each cell and popped the nuclei into mouse eggs.

At first, this maneuver "activated" the mammoth chromosomes, as several biological reactions that occur before cell division actually happened within the mouse cell. But these reactions soon came to a crashing halt, probably, in part, because the mammoth DNA was severely damaged after spending 28,000 years buried in permafrost, the researchers said. [In Photos: Mummified Woolly Mammoth Discovered]

But why did the researchers put mammoth DNA into mouse eggs? The answer has to do with an egg's ability to replicate DNA and divide into more cells.

"The eggs have all of the living cellular machinery that you might need to do error correction and fix damage that has happened within the nuclei," said Beth Shapiro, a professor of ecology and evolutionary biology at the University of California, Santa Cruz, who was not involved with the study. "[The scientists] basically just stuck [the mammoth nuclei] in there and said, 'All right, cellular machinery, do your thing.'"

And, at first, the cellular machinery did try to fix damaged DNA within the chromosomes and piece together the broken bits, Shapiro said. "But [the egg] can only do so much," she told Live Science. "When the nuclei are badly damaged, then it's just not possible to reconstitute this to what you would need to do to actually bring it back to life."

As a result, none of the mouse-mammoth hybrid cells entered cell division, a step that is necessary to create an embryo and, perhaps one day, clone a mammoth.

"The results presented here clearly show us again the de facto impossibility to clone the mammoth by current NT [nuclear-transfer] technology," the researchers wrote in the study, published online March 11 in the journal Scientific Reports.

Put another way, "it's a pretty clear demonstration that this approach is not going to work to clone a mammoth," Shapiro said. "The cells are too damaged."

As soon as the mammoth died, its DNA began degrading. That's because bacteria from the mammoth's gut and the surrounding environment began chomping down on the dead mammoth's cells. Ultraviolet (UV) radiation from the sun also broke down more of the genetic material, and those processes continued for eons. As a result, DNA fragments in the nucleus that survived to today may be only tens to hundreds of bases long, rather than the millions that are found in the DNA of modern elephants, Shapiro said.

However, the study is still exciting, said Rebekah Rogers, an assistant professor of bioinformatics at the University of North Carolina at Charlotte, who was not involved with the research. For instance, if researchers can insert even small fragments of mammoth DNA into a cell line, that could reveal what that DNA does in a living creature, she said. [Mammoth Resurrection: 11 Hurdles to Bringing Back an Ice Age Beast]

In the study, the researchers added that "our approach paves the way for evaluating the biological activities of nuclei in extinct animal species."

However, Rogers said she would like to see more evidence that the mammoth chromosomes actually made it into the mouse egg. "It's possible that you could have a highly modified mouse chromosome or potentially some other DNA contamination," she said. "They have this extraordinary claim that they put mammoth chromosomes into a mouse [egg]. I would really like to see a lot of evidence for that kind of claim."

Other research groups are also trying to resurrect the mammoth, using different technology. George Church, a geneticist at Harvard University and the Massachusetts Institute of Technology who is heading the Harvard Woolly Mammoth Revival team, is taking one approach. He's using CRISPR — a tool that can edit DNA's bases, or letters — to insert woolly mammoth genes into the DNA of Asian elephants, which are closely related to the extinct animals.

"They're not trying to revive a mammoth genome," Shapiro said. "They are trying to create one by tweaking an elephant genome. In that way, they could have a living cell as an end product."

Bringing back the ice age mammals is controversial, however. Many conservationists argue that resources should be spent on currently threatened or endangered animals rather than beasts that died off long ago.