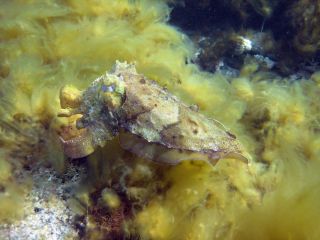 Righty cuttlefish males have more sex and win more fights. And this could help explain why lefty humans exist at all.

In a paper published March 13 in the journal Proceedings of the Royal Society B, scientists watched cuttlefish as they hooked up and threw down. Most male cuttlefish, it turns out, are "righties" in sexual situations — meaning that they examine females with their right eyes before mating, and approach females from their right side. But when it comes time to fight the competition, most cuttlefish are "lefties," approaching the fight left-side first.

These results came from a series of observations of cuttlefish mating and messing with each other in the wild, followed by laboratory experiments where the creatures were assigned enemies or lovers under the eye of a well-placed camera.

But in both cases, the righties tend to win out. [Cuttlefish Cuties: Photos of Color-Changing Cephalopods]

This finding, the researchers suggested, could explain why nine out of 10 people are right-handed, but lefties still exist.

This isn't just a human phenomenon: Across the animal kingdom, species tend to have a much-more-common favored side. The term for this is "lateralization." But if one side is more evolutionarily fit than another, why wouldn't it take over the whole species? And, conversely, if sidedness doesn't matter, why does the imbalance exist?

This cuttlefish study, the researchers suggested, demonstrates that there are circumstances in which a species benefits from sharing a dominant side. But individual members can gain some advantages of their own by doing the unusual, less common thing.

If most cuttlefish males are sexual righties, it's easy for cuttlefish females to coordinate with those males, because they know what to expect. The handful of lefties struggle because the females don't expect their style of approach.

But when it comes to fighting, the minority sidedness (again, righties) has an advantage, because that behavior is less predictable. (Human beings see a similar advantage in certain sports where lefties are overrepresented.)

So while most cuttlefish (or humans) play it safe by acting in a normal, predictable, sociable manner, a handful of outliers might seize some advantage by switching things up.