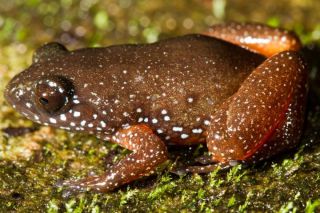 The newly described frog species Astrobatrachus kurichiyana — also known as the starry dwarf frog — measures about one inch long and wears a star-like coat of spots on its back. The frog only lives on one isolated hill in India, and may have no close relatives for tens of millions of years.
(Image: © K.P. Dinesh)

On a lonely plateau in India's Western Ghat mountains, an ancient family of frogs has quietly hidden among the fallen leaves for millions of years, evading human detection. Measuring about the width of a human adult's thumbnail, these tiny frogs sleep by day, hunt by night and wear a galaxy of light-blue speckles on their brown backs to blend in with their dark, little world.

Now, for the first time, a team of researchers, has described the quiet little amphibian. The team has dubbed this newfound amphibian the "starry dwarf frog" (Astrobatrachus kurichiyana) and, according to the team's new paper, which was published today (March 12) in the journal PeerJ, it is the only known species in a never-before-described family that may have lurked alone on its branch of the frog family tree for eons. [40 Freaky Frog Photos]

"This is an oddball frog — it has no close sister species for maybe tens of millions of years," study co-author David Blackburn, the associate curator of herpetology at the Florida Museum of Natural History, said in a statement.

Part of that oddball nature is the starry dwarf's unusually small size. As its nickname suggests, this frog is teeny-tiny, measuring a maximum of 1.14 inches (29 millimeters) from snout to butt — a little longer than the diameter of a U.S. quarter.

Equally striking are its stars. The frog's constellation-speckled back blends in perfectly with the crumpled leaves that carpet its forest habitat, giving the nocturnal amphibians a fine place to hide during the daylight hours. While the team saw some starry dwarf emerge at night, the frogs quickly scampered back beneath the leaves as soon as they were confronted with a flashlight's glare, the researchers wrote. That penchant for stealth may be a key to the frog's longevity, which is impressive considering the starry dwarf is the only known species belonging to an ostensibly ancient family.

"These frogs are relics… This lineage could have been knocked off [the evolutionary tree] at any point in time," lead study author Seenapuram Palaniswamy Vijayakumar, a postdoctoral fellow at George Washington University, said in the statement. "We should be celebrating the very fact that these things exist."

There may well be other "oddball" frogs hopping around India's Western Ghats — a 1,000-mile-long (1,600 kilometer) mountain range made up of isolated plateaus along the country's southwest coast. Like the Galapagos Islands, these plateaus have served as factories of biodiversity for tens of millions of years, each one housing novel species of amphibians and reptiles found nowhere else, the researchers wrote. Finding more of those species may be as simple as turning over a new leaf.