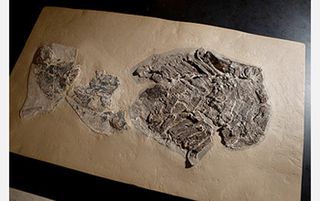 A Gladbachus shark fossil used in the research, pictured in the scientists' lab.
(Image: © Jason Smith.)

Humans have hardy prehistoric fish ancestors to thank for paving the way to their eventual evolution, a new study suggests.

About 360 million years ago a mass extinction event hit the reset button on Earth's life, wiping out most of the fish that existed then near the time when the first vertebrates (all animals with backbones) crawled from water towards land. The species fortunate enough to survive set the stage for modern vertebrate biodiversity.

"Everything was hit; the extinction was global," said study leader Lauren Sallan of the University of Chicago. "It reset vertebrate diversity in every single environment, both freshwater and marine, and created a completely different world."

The extinction hit near the end of the Age of Fishes (more commonly known as the Devonian Period, from 416 to 359 million years ago) for the broad array of species present in Earth's aquatic environments.

Armored prehistoric fish called placoderms and lobe-finned fishes — similar to the modern lungfish — dominated the waters, while ray-finned fishes, sharks and tetrapods — vertebrate animals with four feet — were in the minority.

But between the Devonian Period and the following Carboniferous period, placoderms disappeared and ray-finned fishes rapidly replaced lobe-finned fishes as the dominant group, a demographic shift that persists today.

"There's some sort of pinch at the end of the Devonian," said study team member Michael Coates of the University of Chicago. "Something happened that almost wiped the slate clean, and, of the few stragglers that made it through, a handful then re-radiate spectacularly."

The researchers analyzed the vertebrate fossil record and pinpointed a critical shift in diversity to the Hangenberg extinction event. The Hangenberg event hit 15 million years after another extinction event — the Late Devonian Kellwasser event, considered to be one of the Big Five extinctions in Earth's history — that scientists have long theorized that was responsible for a marine invertebrate species shake-up.

Prior to the extinction, lobe-finned forms such as Tiktaalik and the earliest limbed tetrapods such as Ichthyostega had made the first moves toward a land-dwelling existence.

But after the extinction, a long stretch of the fossil record known as "Romer's Gap," is almost barren of tetrapods, a puzzle that had confused paleontologists for many years. The 15-million-year gap was the hangover after the traumatic Hangenberg event, said the study's authors.

When tetrapods finally recovered, those survivors were likely the great-great-grandfathers to the vast majority of land vertebrates present today, including humans.

The study was published in the May 17 online issue of the journal Proceedings of the National Academy of Sciences.