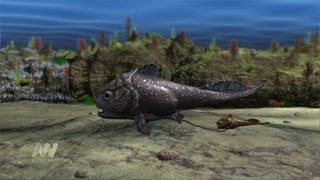 The armored fish Materpiscis attenboroughi, which appeared during the Devonian Period, may have given birth to its young tail-first, similar to some sharks and rays.
(Image: © Museum Victoria.)

An armored fish was about to become a mom some 380 million years ago. Though the primitive fish perished, its fossilized remains remarkably reveal an embryo and umbilical cord inside the soon-to-be mother's body.

The discovery marks the oldest evidence of an animal giving live birth, pushing the known record of such reproduction back by some 200 million years. It also supports the idea that internal fertilization in vertebrates (animals with backbones) originated in a group of primitive fish.

"When I first saw the embryo inside the mother fish, my jaw dropped," said researcher John Long, a paleontologist at Museum Victoria in Melbourne, Australia. "It dawned on me after studying the specimen that this was the earliest evidence of vertebrates having sex by copulation — not just spawning in water, but sex that was fun."

The new species called Materpiscis attenboroughi is a type of placoderm, a group of extinct, armored fish with bone-crushing jaws that ruled the seas throughout the Devonian Period, from 417 million to 354 million years ago.

During an expedition funded by the Australian Research Council, Long and his colleagues discovered the fish remains buried in the Gogo Formation, a renowned treasure trove of well-preserved fish fossils. When Materpiscis lived, this area in Western Australia was a tropical reef teeming with life.

The female placoderm measured less than 10 inches (25 cm) in length. And tucked inside what the researchers speculate was the uterus, the tiny tot was about 25 percent of its adult size.

"The large size of the embryo relative to the mother indicates that the young of this fish were born well-formed, a strategy that may have evolved to counter predation from other larger fishes," said Steven Salisbury of the University of Queensland, who was not involved in the current study.

The two pregnant placoderms make the case that some primitive fish had remarkably advanced reproductive biology, comparable to that of modern rays and sharks, the researchers say in the May 29 issue of the journal Nature.

Examples in the fossil record of animals giving birth are extremely rare. Scientists announced in 2006 the discovery of remains of a pregnant ichthyosaur that lived about 100 million years ago.