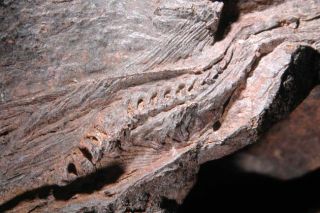 Ichthyosaur fossil containing embryos. The ribs, vertebrae, skull and teeth are visible, with the head bent backwards over the body and to the right.
(Image: © E. Maxwell and M. Caldwell)

Three new species of an ancient marine reptile, including a pregnant fossil, were recently discovered by University of Alberta paleontologists—under a pingpong table.

The ichthyosaur fossils were unearthed from the Loon River Formation in Canada's Northwest Territories 25 years ago, then languished under the pingpong table in the undergraduate science lab until they were rediscovered by newly hired faculty member Michael Caldwell.

"It was pretty amazing to realize this valuable discovery had sat under a pingpong table for 25 years," Caldwell said. "But I suppose that after 100 million years in the dirt, it's all relative."

Caldwell assigned undergraduate student Erin Maxwell to examine the fossils of the dolphin-shaped creatures. They found that not only were the three specimens each new species, but that one of them was pregnant [image].

The fossils provided a look at ichthyosaurs at just the time that they "blink out of the fossil record," Caldwell said. Discovering the new species showed that there was "a little bit more biodiversity [at the time of extinction] than we thought."

But the pregnant fossil was "probably the most interesting find out of the whole pile" because it ranks as the most geologically recent example of ichthyosaur embryos, Caldwell said.

"The embryos are very small, which is why no one had ever seen them before," Caldwell said. "It's incredible that we noticed it."

Maxwell was peering through a microscope at the soft tissue remains that were draped like "meshwork" over the fossil's vertebrae when she noticed two embryos curled up against the rib cage. The features of the embryos were visible "right down to their little teeny weeny teeth," Caldwell said.

Paleontologists can piece together how the embryos would develop thanks to a treasure trove of ichthyosaur fossils dug up over 100 years ago in Holzmaden, Germany. For example, Caldwell knew that the female fossil had no teeth because all of her body's calcium was rerouted to the embryos' developing skeletons.

The species of the pregnant fossil was named Maiaspondylus lindoei after Allan Lindoe, the technician on the original dig who explained the history of the specimens to Caldwell.