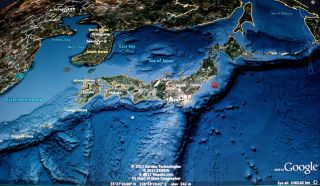 In 2011, a magnitude-9.0 earthquake rumbled to life off the coast of Tohoku, Japan, triggering a massive tsunami and killing more than 15,000 people.

The global effects of the Tohoku earthquake — now regarded as the fourth most powerful since recording began in 1900 — are still being studied. Scientists have since estimated that the quake shoved the main island of Japan 8 feet (2.4 meters) to the east, knocked the Earth as many as 10 inches (25 cm) off its axis and shortened the day by a few millionths of a second, NASA reported in 2011. But for Arata Kioka, a geologist at the University of Innsbruck in Austria, the most interesting and mysterious effects of the quake can't be seen with a satellite; they can be measured only in the deepest chasms of Earth's oceans.

In a new study published Feb. 7 in the journal Scientific Reports, Kioka and his colleagues visited the Japan Trench — a subduction zone (where one tectonic plate dives beneath another) in the Pacific ocean that plunges more than 26,000 feet (8,000 m) at its deepest point — to determine how much organic matter had been dumped there by the history-making quake. The answer: A lot. The team found that roughly one teragram — or 1 million tons — of carbon had been dumped into the trench following the Tohoku earthquake and subsequent aftershocks.

"This was much more than we were expecting," Kioka told Live Science.

The huge quantity of carbon relocated by earthquakes may play a key role in the global carbon cycle — the slow, natural processes by which carbon cycles through the atmosphere, the ocean and all living things on Earth. But, Kioka said, research on this topic has been lacking.

Part of that might be because it involves visiting the deepest places on Earth. The Japan Trench is part of the hadal zone (named for Hades, the Greek god of the underworld), which includes places lurking more than 3.7 miles (6 kilometers) below the ocean's surface.

"The hadal zone only occupies 2 percent of the total surface area of the seafloor," Kioka told Live Science. "It's probably less explored than even the moon or Mars."

On a series of missions funded by several international science institutions, Kioka and his colleagues cruised over the Japan Trench six times between 2012 and 2016. During these cruises, the team used two different sonar systems to create a high-resolution map of the depths of the trench. This allowed them to estimate how much new sediment had been added to trench's floor over time.

Several meters of sediment appeared to have been dumped into the trench in 2011, Kioka said. When the team analyzed these sediment samples at a lab in Germany, they were able to calculate the amount of carbon in each core. They estimated that the total amount of carbon added across the entire trench was up to a million tons.

That's a lot of carbon. For comparison, about 4 million tons of carbon are delivered to the sea annually from the Himalaya mountains via the Ganges-Brahmaputra rivers, Kioka and his colleagues wrote in their study. For a quarter of that amount to end up in the Japan Trench following a single seismic event underscores the mysterious power earthquakes hold in the global carbon cycle.

How, exactly, carbon dumped into Earth's deepest places figures into the broader cycle is still uncertain. However, Kioka said, subduction zones like the Japan Trench might give carbon sediments a relatively quick path into the Earth's interior, where they may eventually be released into the atmosphere as carbon dioxide during volcanic eruptions. Further research is needed, and a planned 2020 expedition to collect even longer core samples from the trench may fill in some historical details going back hundreds or thousands of years.