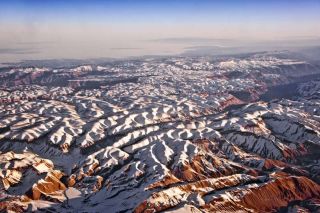 The lofty Himalayas, which stretch some 1,800 miles (2,900 km) along the border between India and Tibet, began to form between 40 million and 50 million years ago, when two large landmasses, India and Eurasia collided. Since the two plates had about the same density, the only way they could relieve the pressure from the crash was to thrust skyward, forming the jagged Himalayan peaks.
(Image: © skyearth | Shutterstock)

Many politically unstable areas of South Asia are "water-stressed," meaning the areas are facing water scarcity due to poor infrastructure or simply lacking enough water to meet demand.

The report examines how changes to Himalayan glaciers could affect the area's river systems, water supplies and population. The region's glaciers cross eight countries and are the source of drinking water, irrigation and hydroelectric power for roughly 1.5 billion people.

Water will become an even more precious commodity in regions that are already water-stressed from both social changes and environmental factors. Climate change could exacerbate this stress in the future, writes the committee who prepared the report. Therefore, changes in water supplies could play an increasing role in political tensions, especially if existing water-management institutions do not evolve to take better account of the region's social, economic and ecological complexities, the committee said.

The Himalayas span 1,200 miles (2,000 kilometers). The largest glaciers are in the west (northern Pakistan and India); they are fed by winter snow and exhibit different characteristics than glaciers in the central (Nepal) and eastern Himalayas (Bhutan), said Bodo Bookhagen, an expert on Himalayan glaciers and professor at the University of California, Santa Barbara. In the latter regions, the glaciers grow via monsoon-fed snows during the summer. That's why increasing temperatures that shift precipitation from snow to rain may shrink these ice fields. [High and Dry: Images of the Himalayas]

Glaciers in the eastern and central part of Himalayas are retreating at rates similar to those in other parts of the world, scientists summarize in the NRC report. The good news is this region gets most of its water through monsoonal rainfall, not glacial runoff. As such, melting glaciers are unlikely to cause significant changes in water availability for people living at lower elevations, the committee said. Shortages are more likely to come from overuse of groundwater resources, population growth and shifts in water-use patterns, the report concludes.

"Societal changes will be at least as important as changes in glacial flows," said Henry Vaux, committee chair and professor emeritus of resource economics at the University of California, Berkeley.

In the western Himalayas, where people do depend on runoff for water, glaciers are relatively stable, and perhaps even advancing, the report states. And the NRC researchers say they don't predict the same high water demands in this regionas on the booming Indian subcontinent.

"The NRC report is important because the social component will help guide future research to where it's needed most — where demand is highest for water," Bookhagen, who was not involved in preparing the report, told LiveScience. "No other study has looked at the population living downstream."

To minimize future risk and uncertainty, the report authors call for extensive monitoring of current water use, the region's shifting climate and its glaciers. "The most dangerous situation to monitor for is a combination of state fragility (such as recent violent conflict, obstacles to economic development and weak management institutions) and high water stress," the committee wrote.

The most important steps governments can take right now are to protect water quality and regulate their current water resources, said Vaux.

The largest impacts due to climate change over the next decade or two will most likely be the result of changes in the timing, location and intensity of monsoonal activity, the report said. Scientists debate whether the storms will arrive earlier, or with different amounts of precipitation than before. Some models project that global warming will increase rainfall, an example of which is the flooding in Pakistan in July and August 2010, which killed 1,760 and had losses totaling $9.5 billion. However, as a whole, the region fed by the monsoon has experienced below-average rainfall in the past decade.