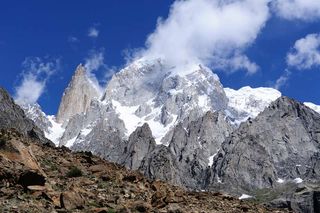 Unlike the rest of the Himalayas, which are losing mass, the Karakoram glaciers seem to be holding steady or even gaining ice, finds a new study. (Shown here, the Karakoram's Hunza and Lady Finger peaks.)
(Image: © Takayuki Hayato | Shutterstock)

Glaciers and sea ice around the world are melting at unprecedented rates, but new data indicates that this phenomenon may be lopsided. It seems that some areas of the Himalayan mountain range are melting faster than others, which aren't melting at all, a new study indicates.

Specifically, the Karakoram mountain range is holding steady, and may even be growing in size, the study, published in the April 2012 issue of the journal Nature Geoscience, suggests.

"The rest of the glaciers in the Himalayas are mostly melting, in that they have negative mass balance, here we found that glaciers aren't," study researcher Julie Gardelle, of CNRS-Université Grenoble, France, told LiveScience. "This is an anomalous behavior."

The Karakoram mountain range spans the India-China-Pakistan border. It is home to the world's second highest peak, K2, and has the highest concentration of peaks over 5 miles (8 kilometers) high in the world. It is home to about half of the volume of the Himalayan glaciers.

They found that the glaciers are holding steady and based on the numbers might actually be gaining mass. But Gardelle warns this doesn't mean global warming and glacier melt isn't happening elsewhere.

"We don't want this study to be seen as questioning the planet's global warming," she told LiveScience. "With global warming we can get higher precipitation at high altitudes and latitudes, so thickening isn't out of the question." [10 Global Warming Myths Busted]

Glaciers grow and shrink based on how much snow falls and the temperatures in the area. Why this area isn't showing the melt seen in other areas is still a mystery. "For now we don't have any explanation," Gardelle said. "There's been a study reporting an increase in winter precipitation, this could maybe be a reason for the equilibrium, but that's just a guess."

Because of its location and physical characteristics of the glaciers themselves, it was been exceptionally difficult to study the glaciers in this region. Usually satellite photos are combined with physical readings of the ice extent, and Gardelle says they'd like to get the physical data in the future to validate their findings.

Previous estimates had suggested the Himalayan mountain range as a whole was contributing about 0.04 millimeters per year to sea-level rise. These numbers now need to be adjusted to account for the anomaly of the Karakoram region, and are probably more like negative 0.006 millimeters per year, the researchers say.

"Evidently, extrapolation and analogy have failed in this significant region," Graham Cogley, a researcher from Trent University, in Canada, who wasn't involved in the study wrote in an accompanying essay in the same issue of Nature Geoscience.

"It seems that, by a quirk of the atmospheric general circulation that is not understood, more snow is being delivered to the mountain range at present and less heat," Cogley wrote. "Gardelle and colleagues have demonstrated that the mass balance of Karakoram glaciers is indeed anomalous compared with the global average."