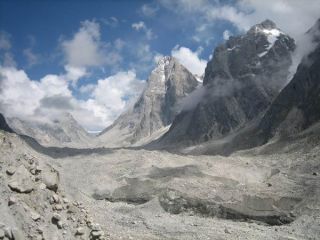 Western Himalaya, India, Upper Tons Valle, terminus region of Jaundhar Glacier (about 14 kilometer long). In the foreground on the left is an outcrop of a lateral moraine. View looking northeast along about 5 kilometers of the debris-covered lower part of the glacier at about 4,300 meters above sea level.
(Image: © Dick Scherler, University of Potsdam)

Climate change doesn't affect all glaciers in the same way. While scientists say most of the world's glaciers are retreating due to the warming climate, some glaciers in the Himalayas are stable or even slowly advancing, a new study finds.

These glaciers are covered mostly with debris rocks, dust and boulders and the researchers think it helps insulate the ice from the warmth.

"When the debris is thicker than a couple of centimeters, it acts like a thermal insulator, so melt rates are lower below that debris cover than where the ice is exposed," Dirk Scherler, a geologist at the University of Potsdam who led the research, told OurAmazingPlanet.

The advancing glaciers are located in the Karakoram region, which runs along the border of Pakistan, India and China, Scherler and his team found.

Understanding how the glaciers are affected by climate change is important because meltwater from the glaciers is the basis of the water supply in many regions around the Himalayas, a series of parallel ranges in Asia that make up the world's highest mountain system .

Using satellite imagery, the research team monitored 286 glaciers over eight years at five hard-to-reach locations in the Himalayas. These remote glaciers had been poorly studied until now. [In Images: Trekking to a Treacherous Glacier ]

The satellite data allowed the scientists to follow the movement at the front of 255 of the glaciers. Scherler and his team concluded that the Himalayan glaciers are being influenced not only by debris cover but other factors that have yet to be pinpointed.

The glaciers that the team studied were in the Karakoram; the Hindu Kush between Pakistan and Afghanistan; the northern and southern Central Himalayas, which run through Nepal; the Western Himalayas; and the West Kunlun Shah (the area furthest inland), located on the Tibetan plateau. In the Karakoram region, around 58 percent of the glacier fronts are either stable or slowly advancing at an average rate of about 26 feet (8 meters) per year. By contrast, 65 percent of glaciers in all other regions are retreating, the researchers reported.

Warming most severely affects glaciers in the west and north Central Himalayas, as well as in the West Kunlun Shah, with over 80 percent of glaciers retreating, Scherler said. Some are retreating as much as 197 feet (60 meters) per year.

"Glaciers in the Karakoram tell us that something is going on, which is quite different from what is going on in the Central Himalayas of Nepal," Scherler said.

Since the glaciers in the Karakoram are behaving so differently from the other glaciers, he said, more study is needed to determine what other factors are affecting their movements.

"This abnormal behavior of the glaciers in the Karakorm suggest that it's not only debris, but also that the climate is different over there," Scherler said.

One possibility, he said, is that the glaciers are being affected by different wind patterns. For example, the glaciers in the Karakoram could be influenced by the westerlies, which would bring in colder air than the Indian and East Asian monsoons send from the ocean to other regions in the Himalayas.

"There's quite a bit of spatial variability and you can't dump all glaciers of the Himalayas into one category," Scherler said. It will be "important to understand how these glaciers behave in the future, because so many people depend on them."