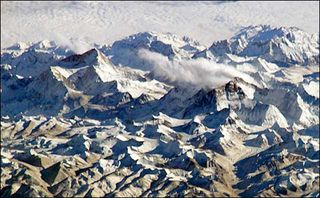 Himalayan glaciers, as seen in this image taken by an astronaut on the International Space Station, help replenish many of Asia’s most important rivers.
(Image: © NASA's Johnson Space Center)

SAN FRANCISCO — Tiny particles of pollution known as "black carbon" — and not heat-trapping greenhouse gases — may be causing most of the rapid melting of glaciers in the Himalayas, a key water source for much of Asia.

The contribution of this form of man-made pollution, sometimes called soot, to the speedy melting occurring in this mountainous region – sometimes known as Earth's "third pole" – was discussed here today at the annual meeting of the American Geophysical Union.

The Himalayas are home to some 110 peaks that stretch along 1,550 miles (2,500 km) of Asia and harbor 10,000 glaciers. These massive rivers of ice hold the third largest amount of stored fresh water on the planet (after the North and South Poles).

All that frozen water is the main source of replenishment to lakes, streams and some of the continent's mightiest rivers, on which millions of people depend for their water supplies.

But since the 1960s, the acreage covered by Himalayan glaciers has declined by more than 20 percent. Some glaciers are melting away so rapidly that scientists worry they could disappear by mid-century.

The rate of warming in the Himalayas has been about twice the global average over the past 30 years, scientists have found.

New research by several groups of scientists has found that the increase in greenhouse gases, such as carbon dioxide, might not be the main culprit. Instead, another more localized source of pollution emitted by industrial and other processes might be responsible for most of the melt.

"Tibet's glaciers are retreating at an alarming rate," said James Hansen, a member of one of the study teams and the director of NASA's Goddard Institute for Space Studies in New York City. "Black soot is probably responsible for as much as half of the glacial melt, and greenhouse gases are responsible for the rest."

Black soot (or black carbon) is created when the combustion from burning fossil fuels is incomplete.

Many of the major cities near the Himalayas – Delhi, Karachi and Dhaka – are responsible for the production of this pollution through the use of diesel engines, coal-fired power plants and outdoor cooking stoves. The amount of soot emitted from the area's cities has been on the rise in recent decades.

"This is a very populated and polluted area," said William Lau, member of another study team and head of atmospheric science at NASA's Goddard Space Flight Center in Greenbelt, Md.

The circulation of the atmosphere in the region causes much of the soot-laden air to "pile up" against the Himalayas, Lau explained at a press conference here today.

This soot mixes with other dust from nearby deserts, creating a massive brown cloud visible from space that absorbs incoming solar radiation. As this layer heats up in the Himalayan foothills, it rises and enhances the seasonal northward flow of humid monsoon winds, forcing moisture and hot air up the slopes of the majestic mountain range.

As these particles rise on the warm, overturning air masses, they produce more rain over northern India, which further warms the atmosphere and fuels this "heat pump" that draws even more warm air to the region.

This "heat pump" changes the timing and intensity of the monsoon, transferring heat and hastening the melting of glaciers in the region.

Both studies that have modeled this air-mass movement, along with examinations of soot levels in cores of ice drilled from the glaciers, have shown that soot likely has a strong effect on the climate and warming in the region.

Scientists say more work is needed to pin down the relative contributions of black carbon and greenhouse gases.

"The science suggests that we've got to better monitor the flue on our 'rooftop to the world,'" Lau said. "We need to add another topic to the climate dialogue."

But the scientists at the meeting stressed the importance of monitoring this warming contribution because of its potential impact on water sources in Asia. The worry is that if glaciers disappear, so will the fresh water they provide to the region's inhabitants.