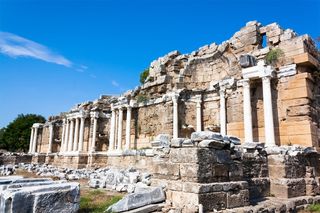 An ancient theater (though not the one in the study) in the city of Hierapolis, located in Pamukkale, Turkey.
(Image: © Shutterstock)

In ancient Rome, castrated priests sacrificed animals in a theater that housed a cave to the underworld, also known as the "Gate to Hell." But the priests didn't use knives or other human-made weapons to kill the beasts; rather, the victims suffocated on a deadly gas seeping from the cave, a new study finds.

"More than 2,000 years ago, these phenomena could not be explained scientifically, but only by the imagination of supernatural forces from Hadean depths or well-meaning gods," the researchers wrote in the study. [Photos: The Secret Passageways of Hadrian's Villa]

Scientists with the Italian Archaeological Mission excavated the Gate to Hell during an archaeological dig between 2011 and 2013, in southwestern Turkey's ancient city of Hierapolis. The archaeologists recognized the ruins as a Plutonium, a sanctuary of the gods of the underworld — Pluto and Kore. (In ancient Greece, these gods were known as Hades and Persephone.). The cave, or grotto, sat below the theater.

The Plutonium and a famous Apollo temple in the region are located on top of a fault line that emits deadly levels of CO2. It's possible that ancient herders learned about these toxic CO2 vapors when their animals got ill or died after venturing too close to the vents. This would have prompted priests to build temples and sanctuaries on top of these mysterious spots, said study lead researcher Hardy Pfanz, a volcano biologist at the University of Duisburg-Essen, in Germany.

Sites that release high levels of CO2 are called mofettes. And the mofette in Turkey is hardly the only one used by ancient priests, he said.

"The ancient gates to hell (which we are studying in southern Italy, western Turkey and Greece) are sometimes located directly on CO2-emitting mofette sites," Pfanz told Live Science in an email.

But ancient people likely didn't know it was CO2 that enabled the priests to sacrifice the animals. Instead, as ancient writings by philosophers Strabo and Plinius indicate, people thought the breath from Pluto's hound Kerberos (the multiheaded dog that guards the gates to the underworld in Greek mythology) caused the strange, deadly vapors.

"As the three-headed hell-hound Kerberos is guarding the entrance to Hades, this makes sense: Kerberos was thought to have an extremely toxic and life-threatening breath," Pfanz said.

The researchers used a portable gas analyzer system to study the CO2 levels at the Plutonium. But even without the equipment, the dead animals in the grotto signaled the deadliness of the gas.

"The great number of corpses of insects and birds corroborated the existence of a deadly CO2 gas lake in front of the grotto," the researchers wrote in the study. "On our first day, two dead birds and more than 70 dead beetles were found asphyxiated at the floor."

Moreover, the researchers heard "locals report on dead mice, cats, weasels and even asphyxiated foxes," they wrote. Usually, these deaths happened during the dark evening and morning hours, they noted.

That's because the grotto had an actual CO2 lake, and the lake's gas levels change over the course of each day. "[The gas] was high in the early morning hours, was destroyed by the infrared of the sunlight, and thus very low during bright days, and increased again in the evening hours (around sunset)," Pfanz said. "Sacrificing bulls and goats must therefore have been carried out only in the morning or evening hours (or on cloudy days)." [Photos: Gladiators of the Roman Empire]

The priests likely knew another secret: The deadly vapors only reached so high. While a beast would expire in the grotto within minutes, the priest could stand on a tall stone, allowing him to breathe far enough away from the source of the deadly gas, the researchers found.

"At this height, they could stand for 20 to 40 minutes without being endangered," Pfanz said.

Audience members, however, were likely safe. The CO2 lake never got higher than about 5 feet (1.5 meters). Moreover, CO2 is heavier than air, so it stayed at the bottom of the grotto.

"From the seating rows (for hundreds of pilgrims), one could see the things happening down in the arena without being endangered," Pfanz said. "The pilgrims threw small birds into the gas lake and watched how they died."

The study was published online Feb. 12 in the journal Archaeological and Anthropological Sciences.