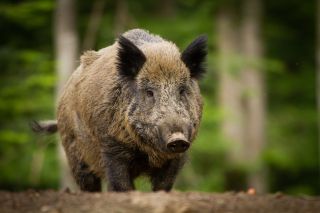 A wild boar walking through the forest.
(Image: © Shutterstock)

That's because workers in Denmark began building a wall yesterday (Jan. 28) to secure the country's southern border from the specific threat of German wild boars. Officials hope the wall will help protect Denmark's sizable domestic pig population from the ravages of African swine fever (ASF) — a disease that's fatal to pigs but benign to humans — without impeding human travelers. While no cases of ASF have turned up in Denmark yet, wild boars in nearby Belgium have tested positive for the deadly fever as recently as September 2018. Germany, meanwhile, has a much larger wild boar population than Denmark, and that has some Danes concerned.[10 Deadly Diseases That Hopped Across Species]

The wall (actually an electric steel fence) will stand about 5 feet (1.5 meters) high and span 40 miles (64 kilometers) across the nation's border with Germany. While smaller critters like otters and foxes should still be able to slide through at small gaps scattered along the fence, larger boars will find themselves hamstrung, according to a statement from Denmark's Ministry of Environment and Food.

The project is estimated to cost about $12 million, which could be money well spent if the fence successfully prevents a swine fever outbreak from reaching Danish piggies. According to NPR, pigs outnumber humans by roughly 2 to 1 in Denmark (about 12 million pigs to just less than 6 million Danes), and the country makes about $5 billion a year from pork exports. A single confirmed ASF outbreak in Denmark could mean slaughtering entire herds of pigs and halting pork exports outside of Europe, NPR reported.

Still, the planned boar-der fence has its opponents. Some worry that the wall will be useless; according to a German agricultural minister quoted on the German news site Zeit Online, the ASF virus "spreads mainly through people — through animal transport, hunting trips, infected food," and won't likely be stopped by a low wall of steel.

Environmentalists, meanwhile, warn that the fence could endanger the migratory patterns of protected animals like the wild wolf, which just reappeared in Denmark after a 200-year absence, NPR reported.

Nevertheless, work on the wall has officially begun, and is scheduled to conclude in autumn 2019.