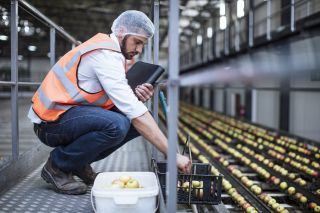 The ongoing government shutdown has put a halt to some food safety inspections, but that doesn't necessarily mean that your salad or sushi is any more risky to eat than before.

On Wednesday (Jan. 9), the U.S. Food and Drug Administration (FDA) Commissioner Dr. Scott Gottlieb said on Twitter that due to the shutdown, the FDA has postponed its routine inspections of domestic food facilities. The agency typically conducts about 8,400 routine food inspections per year, and over this past week, there could have been "a few dozen" inspections that didn't take place due to the shutdown, Gottlieb tweeted.

Although FDA inspection delays certainly don't help with food safety, it's important to keep in mind that the agency is just one of many entities that help keep food safe — there are other federal, state and local agencies that have yet to be impacted by the shutdown. [Top 7 Germs in Food That Make You Sick]

Removing FDA food inspections "is certainly not a good thing in my mind," said Benjamin Chapman, an associate professor and food safety specialist at North Carolina State University. But Chapman added that, right now, he thinks food on American tables is likely as safe to eat as it was before the shutdown.

"Inspections are just one part of the food-safety system puzzle," Chapman told Live Science. Other entities, including the food industry and state and local folks, "are doing their best to keep things as safe as possible." However, if the shutdown was to stretch for months or years, "the infrastructure and support to the food industry could start to impact the safety of the food we are eating."

Within the federal government, both the FDA and the U.S. Department of Agriculture (USDA) oversee the country's food safety. The USDA inspects food facilities that handle meat, poultry and some egg products, while the FDA inspects all other foods — everything from raw produce to packaged foods. During the shutdown, USDA employees are still conducting inspections of meat, poultry and egg facilities, although these workers are not getting paid, according to Vox.

The FDA is also still conducting inspections of imported foods, Gottlieb said. Domestic food inspections have been postponed, but according to Gottlieb, the agency plans to resume inspecting "high-risk" food facilities as soon as next week. High-risk foods make up about a third of the FDA's total inspections and include foods such as fresh fruit and vegetables, prepared salads, soft cheeses, and seafood, Gottlieb said.

But the vast majority of food inspections done in the U.S. are conducted by state employees, Chapman said. "There are hundreds of thousands of state-inspected food facilities nationally," Chapman said.

Indeed, the FDA is able to inspect only a small fraction of U.S. food facilities. Helena Bottemiller Evich, a senior food and agriculture reporter at Politico, noted on Twitter that while the FDA typically inspects about 50 high-risk food facilities per week, there are more than 20,000 such facilities in the country.

Chapman also said that food prepared at restaurants and in grocery stores is regulated at the state and local level.

And while it's unclear exactly how much the shutdown has impacted people's risk of foodborne illness over the last week, the situation is affecting activities done by food safety workers at the state and local level, Chapman said.

For example, state and local food-safety employees often consult and collaborate with federal experts on many projects to make food safer. "From what I understand, many of those activities are in limbo," Chapman said.

Chapman added that the management of food recalls at the state level has become more tedious, because the number of federal staff members available to answer state agency questions has been reduced. "So, what might have taken a few minutes before the shutdown is taking hours or days. This could delay market removal [of recalled foods], which isn't good," Chapman said.