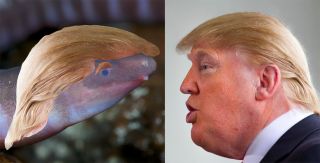 It's blind and slimy, and its head is indistinguishable from its rear. Sound like anyone you know?
(Image: © Photos: Matthijs Kuijpers/Matthew Cavanaugh. Photo montage: EnviroBuild)

A blind, ground-burrowing, worm-like amphibian has a new and presidential name, after its physical features and habits drew comparisons to Donald Trump.

Meet Dermophis donaldtrumpi, a member of the group called caecilians (seh-SILL-yens), which are limbless amphibians found in the tropics. The creature was one of 12 unnamed species from Latin America; naming rights for each of them were offered at auction on Dec. 8, as part of a fundraiser for conservation organization Rainforest Trust, according to a statement.

EnviroBuild, a U.K. supply company of sustainable building materials, won the right to name the new-to-science caecilian from Panama. The company paid $25,000 for the privilege, the highest bid at the auction. EnviroBuild's choice acknowledged Trump's "commitment to environmental issues," EnviroBuild representatives said in a statement. [11 Animals Named After US Presidents]

It may not seem like a worm-like, sightless creature that buries itself in the dirt has anything in common with a U.S. president. However, closer examination of Trump and his new namesake reveals that they share many similarities, EnviroBuild said.

Caecilians' rudimentary eyes can distinguish only light and dark; their name comes from the Latin word "caecus," which means "blind." While Trump is not blind, his views on climate change demonstrate blindness to the evidence of a warming world, EnviroBuild representatives said. In 2012, Trump tweeted that climate change was a hoax perpetrated by China, to make the U.S. less competitive. And though Trump recently admitted on the CBS program "60 Minutes" that climate change is really happening, he questioned whether humans were responsible (we are).

Limbless D. donaldtrumpi lives underground, burrowing deep in the dirt; Trump, too, metaphorically buries his head in the sand by rejecting the scientific consensus on climate change and by approving policies that harm the environment, the EnviroBuild statement said.

And caecilians in the Dermophis genus have a high-stakes strategy for helping their young to survive; in this practice, called dermatrophy, the parents grow an extra layer of skin for their babies to eat. Trump's children likely do not feed on his skin, but he does provide for his young by giving them high-stakes rewards: positions in the White House, EnviroBuild representatives said.

Another species was named for Trump in January 2017: Neopalpa donaldtrumpi, a small moth whose head is topped with yellow and white scales resembling the president's hairstyle, the namer said.

That moth's habitat extends from Southern California into Mexico and would be bisected by Trump's proposed border wall. By naming the moth after Trump, evolutionary biologist Vazrick Nazari, a researcher from Ottawa, Canada, hoped to draw attention to vulnerable species and ecosystems, she said. And EnviroBuild is reaching for a similar goal with its Trump-inspired name.

"While the story itself is lighthearted, EnviroBuild are really aiming to push forward an important message: With climate change only accelerating, legislation still isn't doing enough to apply the brakes. This means the only option is to create new avenues ourselves," company representatives wrote.