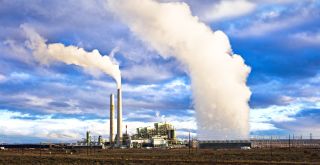 Humans are to blame. That's the verdict of an executive-branch government report concluding that Homo sapiens are the dominant cause of planetary warming since the mid-20th century.

The climate report, released today (Nov. 3), paints a dire picture of the present and future effects of global climate change, from sea levels that could rise by as much as 8 feet (2.4 meters) by 2100, to more-frequent heat waves and other extreme weather events. It is also in stark contrast to climate change stances taken by President Donald Trump, who has ranged from calling it a hoax to saying he had an "open mind" about whether human-caused climate change is actually happening.

"Many lines of evidence demonstrate that it is extremely likely that human influence has been the dominant cause of the observed warming since the mid-20th century," the authors wrote. "Over the last century, there are no convincing alternative explanations supported by the extent of the observational evidence." [6 Unexpected Effects of Climate Change]

"Human-caused climate change has made a substantial contribution to this rise since 1900, contributing to a rate of rise that is greater than during any preceding century in at least 2,800 years," the report said. "Global sea level rise has already affected the United States; the incidence of daily tidal flooding is accelerating in more than 25 Atlantic and Gulf Coast cities." [Photographic Proof of Climate Change: Time-Lapse Images of Retreating Glaciers]

And things are getting hotter, with annual average temperatures over the contiguous United States increasing by 1.8 degrees Fahrenheit (1 degree Celsius) between 1901 and 2016. And over the next few decades, scientists predict those temperatures will rise by about 2.5 degrees F (1.3 degrees C) relative to the period of 1976 to 2005, the report said.

The Climate Science Special Report (CSSR) is based on an analysis of peer-reviewed research, publicly available resources, and certain models and data sets related to climate change, according to the report's executive summary. The report was overseen by the U.S. Global Climate Change Research Program, which itself consists of 13 federal agencies that deal with environmental issues, ranging from NASA to the Department of Energy and the Department of State. The group assesses the current state of climate science as part of the National Climate Assessment (NCA) program. The new report is the first volume of the fourth-ever NCA (NCA4). The first NCA was published in 2000, the second in 2009 and the third in 2014.

Ultimately, the U.S. Global Climate Change Research Program is under the oversight of the White House Office of Science and Technology Policy (OSTP). President Trump has yet to name a head for his administration's OSTP. Previous presidents have typically filled the role before they've taken office or within a few months of doing so, according to The Washington Post.

The new report's findings conflict with Trump's stated positions on climate change. Over the years, he has called human-caused climate change a "hoax," including in a 2013 tweet that read, "We should be focused on magnificently clean and healthy air and not distracted by the expensive hoax that is global warming!" During the presidential campaign, Trump was vague on his beliefs about climate change, sometimes indicating he did not believe it was a problem, but telling The New York Times editorial board in 2016 that he had an "open mind" on the issue.

In office, Trump said that the U.S. would withdraw from the Paris Climate Accord, an international agreement that aims to limit global warming to below 3.6 degrees F (2 degrees C) above preindustrial temperatures. The president also nominated Scott Pruitt, a former Oklahoma attorney general who rejects the evidence that human-made carbon dioxide emissions are driving climate change, to head the Environmental Protection Agency (EPA).

In addition to documenting changes in temperatures and sea levels, the new report warns that heavy rainfall events are increasing across the United States, as are heat waves and forest fires. Reduced snowpack and early spring melt are driving water scarcity in the western U.S., according to the report, threatening to bring about long-term drought by the end of the century.

Atlantic hurricanes are likely to bring greater amounts of precipitation on shore in a warming world and may increase in intensity, according to the report. Small tidal floods have already increased between five-fold and 10-fold since the 1960s in U.S. coastal cities, and the rate of these floods continues to increase in 25 cities along the U.S. Gulf and Atlantic Coasts.

Such reductions require a major effort that would need to start rapidly, the report continued.

"After accounting for the temperature effects of non-CO2 species [such as methane], cumulative global CO2 emissions must stay below about 800 GtC [gigatons of carbon] in order to provide a two-thirds likelihood of preventing 3.6 degrees F (2 degrees C) of warming," the authors wrote. "Given estimated cumulative emissions since 1870, no more than approximately 230 GtC may be emitted in the future in order to remain under this temperature limit."

As is, the authors wrote, emissions are likely to surpass that level within two decades.