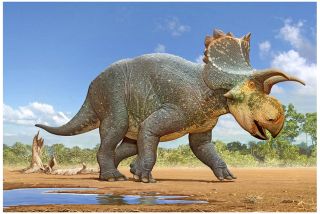 An illustration of the newly identified dinosaur Crittendenceratops krzyzanowskii, which lived about 73 million years ago.
(Image: © Sergey Krasovskiy)

If head frills were a fashion statement, a newly identified 73-million-year-old triceratops relative was certainly at the top of its game.

The newfound dinosaur named Crittendenceratops krzyzanowskii sported a fancy frill on the top of its head, a new study finds. In fact, it's the youngest-known dinosaur of its clade (the nasutoceratopsins), as well as the first of its clade on record to sport an elaborate frill, the researchers said.

"This clade has simple frills." said study co-lead researcher Sebastian Dalman, who was at the New Mexico Museum of Natural History and Science at the time of the research. "Crittendenceratops is the first member of this clade with [an] ornamented frill." [Tiny & Old: Images of 'Triceratops' Ancestors]

The late Stan Krzyzanowski, a research associate at the New Mexico Museum of Natural History and Science, discovered two of the late Cretaceous creatures in the 1990s in a mountain range near Tucson, Arizona. Krzyzanowski and his colleagues briefly described the dinosaur in a 2003 study, but it wasn't until recently that another look at the fossils revealed they represented an unidentified species.

It was the beast's unique frill that revealed it was a newfound species, Dalman told Live Science in an email. The researchers named the dinosaur's species name after Krzyzanowski, to honor this discovery. The genus name (Crittendenceratops) is derived from the Fort Crittenden Formation, where the fossils were found. The suffix "ceratops" means "horned-face" in Greek.

Back then C. krzyzanowskii lived by the banks of a great lake in a forest of conifer and palm trees, said study co-lead researcher Spencer Lucas, a curator of paleontology at the New Mexico Museum of Natural History and Science in Albuquerque. The fancy-frilled beast shared this area with mud turtles, alligators, duck-billed dinosaurs and even vicious tyrannosaurs.

Although Arizona is fairly arid now, it was a warm and wet subtropical place during the late Cretaceous. So the area offered a bountiful buffet for the 1,500-lb. (680 kilograms) C. krzyzanowskii, which likely chowed down on the region's shrubs and conifers, Lucas said.

The study was published online in October in the New Mexico Museum of Natural History and Science Bulletin.