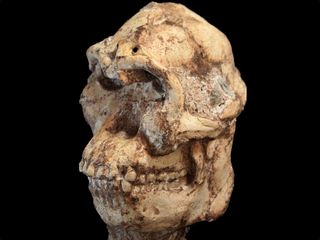 In a recent study, scientists compared the skull of Little Foot (shown here) with that of other hominins.
(Image: © Photo courtesy of the University of the Witwatersrand)

Little Foot is likely a previously unknown species, the researchers said. In four newly posted studies — all available on bioRxiv, meaning they are not yet published in a peer-reviewed journal — the researchers delved into Little Foot's anatomy. Their findings reveal that Little Foot likely walked upright on two feet and probably had a nearly lifelong injury on her left arm.

The successful two-decade-long excavation of Little Foot was "almost a miracle," study researcher Robin Crompton, a musculoskeletal biologist at the University of Liverpool, in the United Kingdom, told Nature, because the bones themselves were softer than the rock surrounding them in the Sterkfontein caves, about 25 miles (40 kilometers) northwest of Johannesburg. [In Photos: 'Little Foot' Human Ancestor Walked with Lucy]

"Immediately upon her fall [in the cave], she lay with her pelvis in a pool of water," Crompton told Live Science in an email. "Before the cave infill became solidified, her bones thus became decalcified and extremely fragile and in some cases, such as the shoulder blade or scapula, paper-thin."

Researchers first came across Little Foot's remains in 1994, when Ronald Clarke, a paleoanthropologist at the University of the Witwatersrand in Johannesburg, found some small bones in a collection of fossils recovered from the Sterkfontein caves. The collection was previously thought to contain ancient monkey bones. But an analysis revealed that some of the bones were something else entirely. The scientists dubbed the newfound specimen Little Foot because its foot bones are quite small.

Clarke detailed that Little Foot was a member of the genus Australopithecus, much like the famous Lucy (Australopithecus afarensis), who lived about 3.2 million years ago. Just as its name implies, Australopithecus, which means "southern ape," is an ape-like hominin. (The hominin group includes humans, our ancestors and our close evolutionary cousins, such as chimps and gorillas. In essence, hominins are bipedal primates that have increased brain size.)

"We have, for the first time so far anywhere in the world for early human relatives ... complete upper and lower limb bones, so estimation of bone lengths, which is common practice but obviously has its risks, is unnecessary," Crompton told Live Science. While the 1.5-million-year-old Nariokotome Homo erectus boy has nearly complete limb bones, he is far younger than the 3.67-million-year-old Little Foot, Crompton added.

Little Foot was likely a 4-foot-3-inch-tall (130 centimeters) adult female and a vegetarian to boot, the researchers of the new studies found. In one bioRxiv study, published online Nov. 29, the researchers investigated how Little Foot likely moved. The researchers found that her arms were not as long as her legs, meaning she had similar proportions to those of modern humans. In fact, Little Foot is the oldest known hominin to have this feature, which suggests that she felt more at home walking on the ground than other, largely tree-dwelling Australopithecus species, Crompton told Nature.

"My analysis of her skeleton shows that she, and the rest of the local population of her species at that time, were under active natural selection for an ability to walk efficiently, fully upright, on the ground over medium to long distances," Crompton told Live Science.

The findings detailed in another bioRxiv study, published online Dec. 5, suggest that Little Foot sustained an arm injury early in life. Her forearms (the area between the wrist and the elbow) are not mirror images. Instead, the left forearm is more bowed than the right, the researchers wrote in the study. Perhaps, Little Foot fell onto a hyperextended, outstretched hand when she was a juvenile, they said.

This type of deformation in forearm bones "is well-documented in modern human clinical studies, especially among children between the ages of 4 and 10 years who tumble from bicycles or suffer other common, relatively low-impact accidents," the researchers wrote. "Left untreated, such injuries impinge normal supination and pronation of the hand."

However, Little Foot's injury healed long before she fell into the cave and died. "The fatal fall may have been during a struggle with a large monkey, as the skeleton of one was found very close to hers," Crompton told Live Science.

In another study, scientists looked at how long ago Little Foot lived (the researchers suggest 3.67 million years ago), while the other study involved a comparison of her skull with those of other hominins. Future papers will detail findings about Little Foot's hands, teeth and inner ear, and the whole collection is slated to be published in a special edition of the Journal of Human Evolution, Crompton said. [In Pictures: Uncovering the Beds of Ancient Humans]

Given that Little Foot appears to be a newfound species (based, in part, on her teeth and hips), the researchers of the new studies named her Australopithecus prometheus. This name was given to a hominin skull fragment found in South Africa in 1948, but it fell by the wayside after researchers decided that the fragment likely belonged to an unusual A. africanus.

But Lee Berger, an archaeologist at the University of the Witwatersrand who was not involved with the new research, said that if Little Foot is actually a newly identified species (something he's not sure of yet), then she deserves a new species name, not a recycled one that's not well-defined, Berger told Nature.

But Crompton defended the name. After the A. africanus specimen was properly named, Clarke started using A. prometheus for other fragmentary bones found in the cave, Crompton told Live Science.

"It is bad practice, and against the International Code of Zoological Nomenclature, to create new names where a valid name already exists and no good argument for separation into a different species exists," Crompton said. "So, as Prof. Clarke did not have evidence that [Little Foot] was part of a different species than Australopithecus prometheus, and he had continued to use that name for some Sterkfontein fossils in the published scientific literature, it was entirely appropriate that he used the existing and valid name."

Editor's Note: This story was updated at 10:59 a.m. EST to include additional comments from Robin Crompton.