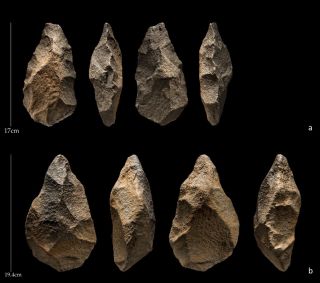 Ancient human relatives lived on the Arabian Peninsula for an astonishingly long time — from about 240,000 to 190,000 years ago — and spread into the heart of the region by following its blue rivers and lakes, a new study found.

These early human relatives persisted for so long that they could have run into some modern humans, or Homo sapiens, along the way, the researchers said in the study, published online yesterday (Nov. 29) in the journal Scientific Reports.

But the research team didn't make this discovery by studying piles of prehistoric bones. Rather, they traveled to Saudi Arabia to examine and date the stone hand axes that these ancient human relatives created. [In Photos: Hominin Skulls with Mixed Traits Discovered]

In particular, the scientists looked at hand axes made by hominins, a group that includes humans, our ancestors and our close evolutionary cousins. "In other words, as a group, [hominins] postdate the split between the line that gave rise to our ancestors and the line that gave rise to the ancestors of chimps," said study lead researcher Eleanor Scerri, the Marie Skłodowska-Curie Actions fellow at the Max Planck Institute for the Science of Human History in Germany.

Large, expertly shaped cutting tools (such as hand axes) made by hominins are known as Acheulean tools. These instruments — called the "the Swiss army knife of prehistory" — date to 1.5 million years ago; they come from the longest-lasting tool-making tradition in prehistory, Scerri said. Because it's rare to find hominin bones, Acheulean tools are a great stand-in for hominins when trying to figure out when and where they lived, the researchers said.

It's unclear which hominins made the hand axes in Saudi Arabia. "However, hominins that have been found with Acheulean tools include Homo erectus, who was probably a direct ancestor of humans," Scerri said.

Little was known about the Acheulean-making groups in the Arabian Peninsula, the critical region between Africa (where early Acheulean tools are found) and Eurasia (where later Acheulean tools have been uncovered). So, the researchers in the new study convened at Saffaqah, a hominin archaeological site in Riyadh Province, Saudi Arabia. Archaeologists have known about Saffaqah since the 1980s, when they found 8,395 buried artifacts there. But these artifacts had never been dated.

To learn more, the researchers dove into the dirt at Saffaqah, discovering more than 500 additional stone artifacts during the excavation.

The dating revealed that hominins lived in Saffaqah as recently as 188,000 years ago, making it the youngest Acheulean site in southwest Asia, the researchers found. This finding is remarkable, because it shows that the Arabian Acheulean ended just before or at the same time as the earliest H. sapiens made it to the region, the researchers said.

The international team used luminescence dating to determine the age of the tools. This method measures how much light is emitted from energy stored in certain types of rock and soils, as certain minerals store energy from the sun at a known rate, Scerri said. [Photos: Aerial Views of Ancient Stone Structures in Saudi Arabia]

"When these minerals are buried, they can no longer store this energy," she said. "By heating the minerals, the stored energy becomes emptied, and the amount of energy that is emptied gives a measure of a point in time when that mineral was last exposed to daylight."

The research also revealed that these hominins spread throughout Saudi Arabia's landscape via its blue waterways. Although Arabia is a vast desert today, it was greener during several brief periods in the past.

"The hominins making the Acheulean tools at Saffaqah seemed to have made their way into the heart of Arabia when these now-dry river networks and channels were active," Scerri said.

But Saudi Arabia was turning dry again by about 188,000 years ago, she said. So, it's likely that "the hominins responsible for these stone tools were quite resilient in the face of environmental challenges," she said. "Although the site of Saffaqah was not a desert when these Acheulean hominins were there, it was probably still quite an arid environment."