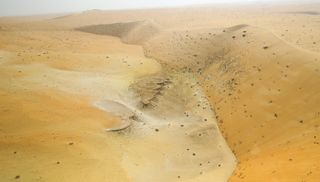 The Nefud desert today, with palaeolake sediments exposed between dunes. The sediments of an ancient lake can be seen between the dunes in this photograph.
(Image: © Copyright Palaeodeserts Project/Max Plank Institute)

Forty-six sites containing artifacts, mainly stone tools, have been discovered beside the remains of ancient lakes in the western Nefud desert in Saudi Arabia.

Some of the tools, left by early humans, date to the Lower Paleolithic period, from 1.8 million to 250,000 years ago, the researchers said in a new study describing the findings. Animal fossils, including fossils from now-extinct forms of jaguar and elephant, were also discovered at some of the sites.

The discoveries shed light on so-called Green Arabia, periods when the climate in Arabia — the area spanning modern-day Saudi Arabia, Yemen, Oman and other Gulf States — was wetter and supported more vegetation and wildlife than it does today. Green Arabia was also home to early humans. [See Photos of the Paleolakes in 'Green Arabia']

"These repeated wet phases, called 'Green Arabia' events, affected much of Arabia and were driven by periodic variations in the Earth's orbit and axis, causing the monsoons to move north into Arabia — and into the Sahara," said Paul Breeze, a landscape archaeologist and research associate at King's College London. "Between these times, Arabia was as arid as it is today."

Breeze is part of the Palaeodeserts Project, which aims to better understand Saudi Arabia's environmental and human history. The project brings together researchers from the Saudi Commission for Tourism and National Heritage, the Saudi Geological Survey, Saudi Aramco and scientists from all over the world.

In their research Breeze and his colleagues searched for lakes that may have existed in ancient times by examining high-resolution satellite and aerial imagery, as well as geological maps. They found that many of these so-called paleolakes might have been located in basins between sand dunes.

The researchers traveled to as many possible paleolakes as they could, using 4 x 4 vehicles or helicopters to reach these locations. They focused on a section of the western Nefud desert.

Once the team reached a site, they examined paleolake sediments, confirming the existence of the ancient lake. Then, they excavated any human artifacts and animal fossils they could find.

From early humans to the future

The discoveries revealed how life changed in the western Nefud desert.

"Lower Palaeolithic hominins in particular could, at times, have experienced widespread favorable environmental conditions," the team wrote in their study, published online in the June 2017 issue of the journal Archaeological Research in Asia. Early human sites that date to the Lower Paleolithic "appear concentrated close to raw material sources near the Nefud fringe, despite the presence of freshwater and fauna deeper in the dune field," the team wrote.

Previously reported research suggested that around 200,000 years ago, after the Lower Paleolithic, modern humans(Homo sapiens) might have used Arabia as a corridor to migrate out of Africa. The new findings suggest that, at that time, humans (whether Homo sapiens or other human species) appear to have been venturing deeper into the western Nefud desert and were no longer sticking to the fringes. [In Photos: Oldest Homo Sapiens Fossils Ever Found]

The researchers did not find any archaeological sites that dated to the Upper Paleolithic or Epipaleolithic time periods, between roughly 40,000 and 10,000 years ago. This may be a sign that the western Nefud had become more arid and less capable of supporting life by that time, the researchers said.

The last "wet period" seems to have occurred between roughly 10,000 and 6,000 years ago,the team wrote in their journal article. After this wet period ended, the climate became increasingly arid, but humans were able to venture deep into the western Nefud desert because they had domesticated the camel, the researchers found.

Today, the Nefud desert receives 1.2 to 3.5 inches (30 to 90 millimeters) of rainfall a year, the researchers wrote, noting that Bedouin groups tend to live on the fringe of the desert and bring animals into the desert for grazing when there is plant growth.

It's uncertain how, exactly, the climate of Saudi Arabia will change in the future.

"The particular combination of Earth's orbital and axial variations that created Green Arabia events are cyclical and will occur again," Breeze told Live Science. "Based on the geological record, we would expect some level of greening of Arabia to happen once more in the future, although likely not in the near future, and it is unclear how human influence on the climate might affect this."