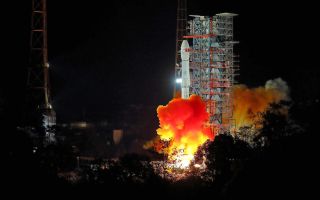 A Long March 3B rocket launches China’s Chang'e 4 lunar probe from the Xichang Satellite Launch Center on Dec. 7, 2018 (Dec. 8 local Chinese time). The probe is expected to make the first-ever soft landing on the far side of the moon in early January 2019.
(Image: © Jiang Hongjing/Xinhua/Zuma)

The first-ever surface mission to the far side of the moon is underway.

If all goes according to plan, Chang'e 4 will make history's first landing on the lunar far side sometime in early January. The mission, which consists of a stationary lander and a rover, will perform a variety of science work and plant a flag for humanity in a region that remains largely unexplored to date. [China's Moon Missions Explained (Infographic)]

Going where no probe has gone before

The moon is tidally locked to Earth, meaning the natural satellite takes about the same amount of time to spin once on its axis as it does to orbit our planet. So, here on Earth, we always see the same face of our cosmic neighbor.

That would be the near side. The far side remains forever out of view, and that explains why this obscured surface has yet to welcome a robotic visitor. Communicating with a far-side lander or rover is difficult, because the entirety of the moon's solid, rocky body would block direct signals traveling to and fro.

To solve this problem, China launched a satellite called Queqiao this past May. Queqiao has set up shop at the Earth-moon Lagrange point 2, a gravitationally stable spot beyond the moon from which the satellite will be able to relay communications between mission control and Chang'e 4.

The spacecraft's signals will likely be coming from the floor of Von Kármán Crater, a 115-mile-wide (186 kilometers) hole in the ground that's the mission's expected landing site. Von Kármán is part of the South Pole-Aitken Basin, one of the biggest impact features in the solar system; it spans a whopping 1,600 miles (2,500 km) from rim to rim.

Chang'e 4 features a total of eight scientific instruments. The landers' are called the Landing Camera (LCAM), the Terrain Camera (TCAM), the Low Frequency Spectrometer (LFS), and the Lunar Lander Neutrons and Dosimetry (LND), which was provided by Germany.

The rover sports the Panoramic Camera (PCAM), the Lunar Penetrating Radar (LPR), the Visible and Near-Infrared Imaging Spectrometer (VNIS), and the Advanced Small Analyzer for Neutrals (ASAN), a contribution from Sweden.

This gear will allow Chang'e 4 to characterize its surroundings in great detail. For example, the LFS will return data about surface composition, while the LPR will tease out the layered structure of the moon's subsurface.

Such information could help scientists better understand why the lunar far side is so different from the near side. For example, huge, dark basaltic plains called maria cover much of the near side but almost none of the far side. (By the way, don't call the far side the "dark side"; it receives just as much sunlight as the near side.)

Chang'e 4 will also conduct some radio-astronomy work, taking advantage of the peace and quiet on the far side, which is shielded from the radio chatter coming from Earth. Queqiao is collecting astronomy data as well, using an onboard instrument called the Netherlands-China Low-Frequency Explorer.

The spacecraft carries a biological experiment as well: a small tin containing silkworm eggs and seeds of potato and Arabidopsis plants. Researchers will keep tabs on how these organisms live and develop on the lunar surface. [Moon Master: An Easy Quiz for Lunatics]

March to the moon

The nation launched the Chang'e 1 and Chang'e 2 spacecraft to lunar orbit in 2007 and 2010, respectively. In December 2013, Chang'e 3 put a lander and a rover named Yutu down on the moon's near side. (Chang'e 4 was originally developed as a backup to Chang'e 3 but was repurposed after the latter's success.)

And in October 2014, China launched Chang'e 5T1, which sent a test capsule on an eight-day trip around the moon that ended in a parachute-aided touchdown here on Earth.

All of this is leading up to the Chang'e 5 sample-return mission, which could launch toward the near side as early as next year. (The nation's line of robotic lunar missions is named after Chang'e, a moon goddess in Chinese mythology.)

And then there's the crewed side of things. Chinese officials have said they want to land people on the lunar surface, though the timeline for this goal is unclear. The moon is not China's human-spaceflight focus in the near term; the country is working to get a crewed space station up and running in Earth orbit by the early 2020s.

Editor's Note: This story was updated to say that the spacecraft had potato seeds. It did not have tomato seeds, as was previously reported.