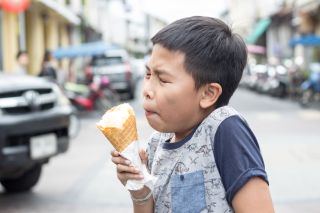 Ice-cold substances hitting the back of the throat can cause blood vessels to expand and contract rapidly, resulting in a temporary but very painful headache.
(Image: © Shutterstock)

You probably don't think of ice cream as a pain-inducing substance, but enjoying those first few spoonfuls of the frozen treat too quickly might bring on a sudden, stabbing pain in the forehead known as "brain freeze."

The pain of brain freeze can begin within seconds of being exposed to cold temperatures, and the intensity of the pain peaks very quickly, often within seconds, said Dr. Stephanie Goldberg, a neurologist and headache specialist at Tufts Medical Center in Boston.

Why do you get it?

Brain freeze, also called an "ice-cream headache," is known in medical terms as a "cold-stimulus headache," Goldberg said. It's a common phenomenon that affects people of all ages, but doctors aren't quite sure why it happens. [Ouch: 10 Odd Causes of Headaches]

For this type of headache, the main trigger is any kind of exposure to a significantly cold temperature, Goldberg said. It's not only caused by an internal trigger, like eating frozen treats too quickly; it can also be caused by an external trigger, such as going outside without a hat on a frigid day or diving into a very cold lake.

Brain freeze may start when a very cold substance — food or air, for example — hits the roof of the mouth or the back of the throat and stimulates blood vessels and nerves in these temperature-sensitive areas.

A small study presented in 2012 found that the sudden increase in blood flow and resulting increase in size of the anterior cerebral artery, a blood vessel located in the middle of the brain behind the eyes, may be responsible for brain freeze pain. The study found that when patients' brain freeze ended, the artery constricted and reduced blood flow, which is likely what caused the pain to disappear. The researchers said they suspect that an increase in pressure within the skull, brought on by increased blood flow to the head, is what causes the pain.

Another possible explanation for brain freeze is that a cold sensation activates an important nerve in the head and face, known as the trigeminal nerve. Once the trigeminal nerve is triggered, blood vessels inside the head momentarily tighten and constrict and then rapidly dilate or widen, resulting in a sudden feeling of pain, Goldberg told Live Science.

When the cold stimulus is removed, the blood vessels go back to their normal size and the pain tends to go away, Goldberg said.Despite being called "brain freeze," this brief episode of head pain doesn't cause permanent damage and isn't life-threatening.

The pain of a cold-stimulus headache tends to come on fast. It occurs within seconds of cold temperatures striking nerves in the palate of the mouth and the back of the throat, Goldberg said.

Cold exposure through the mouth or nose activates the trigeminal nerve system and relays this information to the entire head. That's why the pain is felt in the head and not in the mouth or nose, where the cold sensation originated, she said.

Typically, the pain of brain freeze is most intense in the forehead and then may spread to the temples and the back of the head, Goldberg said. Some people may describe the discomfort as a stabbing or aching type of pain, while individuals who have migraines may perceive it as a throbbing or pulsating pain.

Studies have shown that people who have migraines might be more prone to brain freeze. This is because the trigeminal nerve in those who have migraines is already sensitive and a cold stimulus can activate this nerve pathway even more, Goldberg said.

How to prevent it

The pain of brain freeze is so fleeting that there's no need to treat it, but it can be tricky to avoid, Goldberg said. Of course, people could forgo frozen treats and beverages altogether, but what fun is that?

If you're prone to this harmless headache, the best way to prevent it is to slow down when consuming ice-cold foods and drinks and keep the cold substances away from your upper palate.

Some people say that drinking warm water slowly once the pain begins may help short-circuit the symptoms of brain freeze. Others recommend curling the underside of the tongue against the roof of the mouth, which can bring warmth to this sensitive spot.