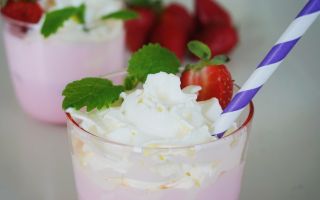 A chocolate milkshake may be bliss for your taste buds, but it's not so good for your blood vessels.

A small new study suggests that consuming just a single, high-fat meal or food item, like a milkshake, may lead to unhealthy changes in your blood vessels and red blood cells.

In the study, researchers had 10 healthy men drink a milkshake made with whole milk, whipped cream and ice cream; the shake contained 80 grams of fat and 1,000 calories. Four hours later, lab tests revealed evidence that the men's blood vessels were less able to relax (or dilate) and that some of their red blood cells changed shaped, becoming "spiky" instead of smooth.

"Your red blood cells are normally nice and smooth and beautiful, and the cells, after consumption of a high-fat meal, get these spikes on them," which could affect blood flow, Julia Brittain, a professor of cell biology and anatomy at Augusta University's Medical College of Georgia, said in a statement.

But there's no need to panic if you just downed a double cheeseburger or a large milkshake; the researchers said the effects of a single high-fat meal are likely temporary for healthy people. But over time, it could add up. [11 Ways Processed Food Is Different from Real Food]

"The take-home message is that your body can usually handle this if you don't do it again at the next meal and the next and the next," Brittain said. The researchers added that their findings may help explain isolated reports of death or heart attack in people right after they consumed a super-high-fat meal.

The men in the study also had temporary increases in levels of an enzyme called myeloperoxidase, which has been linked with stiff blood vessels and heart attacks in humans.

It's important to note that the study was very small, and the researchers don't know for sure if the spiky blood cells are harmful to people's vascular health. Future studies are needed to investigate these effects further.

However, in studies in mice, the researchers previously found that, when the animals were continuously fed a high-fat diet, they experienced permanent changes in the shape of their red blood cells, which triggered an immune response that could contribute to cardiovascular disease.

The American Heart Association recommends that healthy adults limit their fat intake to 20 to 35 percent of their daily calories. (For a person consuming a 2000 calorie diet, this would trasnlate to about 44 to 78 grams of fat a day, according to the Mayo Clinic.).

The study was published March 23 in the journal Laboratory Investigation.