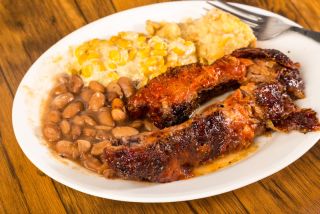 Adults who chow down on traditional Southern foods — such as fried chicken, gravy-smothered liver, buttered rolls and sweet tea — may be at an increased risk of acute heart disease, a new study finds.

Researchers examined the diets of more than 17,400 white and black adults living in the United States, and asked how frequently they ate foods typically considered Southern, including fried foods; fatty foods; processed meats such as bacon and ham; organ meats such as liver; eggs; and sugary drinks.

During the study, there were 536 cases of acute heart disease, which included fatal and nonfatal heart attacks. After controlling for other factors that may influence people's risk of heart disease — such as their level of education, income, physical activity, smoking and age — the researchers found that the people who frequently ate Southern fare were 56 percent more likely to have a heart attack or die from heart disease during the almost six-year study than those who ate it less. [6 Easy Ways to Eat More Fruits and Vegetables]

Other research has tied the Southern diet to an increased risk of stroke, the researchers said.

"Regardless of your gender, race or where you live, if you frequently eat a Southern-style diet, you should be aware of your risk of heart disease and try to make some gradual changes to your diet," Dr. James Shikany, the study's lead researcher and a nutritional epidemiologist at the University of Alabama at Birmingham, said in a statement. "Try cutting down the number of times you eat fried foods or processed meats from every day to three days a week as a start, and try substituting baked or grilled chicken or vegetable-based foods."

This new study is one of the first studies to look at the relationship between diet and heart disease risk that included people from across the United States and from different socioeconomic backgrounds, the scientists said in their report, published online today (Aug. 10) in the journal Circulation.

The participants were part of an ongoing study called the Reasons for Geographic and Racial Differences in Stroke (REGARDS) study, which includes white and black adults age 45 and older. None of the study participants had heart disease when they enrolled in the study, from 2003 to 2007, the researchers said.

Each participant was given a physical examination and completed a questionnaire to rate how often and how much he or she ate certain foods. The researchers followed up with the participants for nearly six years, asking about their general health and any hospitalizations they had experienced.

People who frequently ate more Southern food were more likely to live in the Stroke Belt, as well as be male, black and not have graduated high school. They also tended to earn an annual household income of less than $20,000, and were more likely to smoke, have a higher body mass index (BMI) and waist circumference, and a lower likelihood of exercising, the researchers found. Moreover, greater consumption of Southern food was associated with a higher prevalence of hypertension and diabetes, they said.

The study had limitations, the researchers noted. As with any study based on people's own reports of what they eat, it's possible that the participants didn't accurately remember what types of foods they ate and how often they ate them, the researchers said.

It's not clear exactly why the Southern diet might increase people's risk of heart disease, but the authors offered several ideas. For one, processed meats have high amounts of sodium and nitrate preservatives, which can lead to increased plaque in blood vessels, they said.

What's more, drinking sweetened drinks is linked with having a higher BMI, and can increase inflammation and the risk of diabetes, they said.