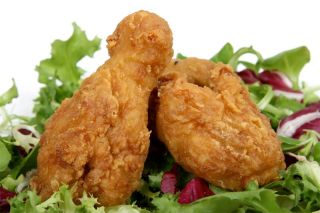 No matter where you live, eating lots of Southern-style foods may increase your risk of stroke, a new study suggests.

By contrast, people in the study who ate a diet high in fruits, vegetables, legumes and whole grains were 29 percent less likely to have suffered a stroke during the study period.

The study only found an association, and not a cause-effect link. But the results agree with previous research findings, which found that people who live in the South are 20 percent more likely to die from a stroke than people who live elsewhere in the country. Because of the high risk of stroke, the region is sometimes referred to as the "stroke-belt."  It includes mainly Southeastern states such as North Carolina, South Carolina, Georgia, Alabama, Mississippi, Tennessee, Arkansas and Louisiana.

African-Americans are five-times more likely to eat Southern-style foods than whites, and they also have a higher risk of stroke.

The new findings agree with previous research that showed Southerners are more likely to eat fried fish often compared with people living in the rest of the country.

When one considers factors that increase cardiovascular disease risk, the Southern diet poses a triple threat, said study researcher Suzanne Judd, Ph.D., a nutritional epidemiologist at the University of Alabama at Birmingham. Fried foods are high in fat and salt, which can raise cholesterol levels and blood pressure, respectively. And regularly downing sugar-sweetened beverages can increase the risk of Type 2 diabetes, another risk factor for cardiovascular disease, Judd said.

The study analyzed information from more than 20,000 black and white adults ages 45 and older from 48 states.

All the study participants had a medical examination at the start of the study, and were surveyed by phone every six months after that about whether they had suffered a stroke. They also answered questions about the types of foods they ate.

Health-care providers should make sure they ask their patients about the foods they commonly eat, and educate them about the importance of eating a healthy diet, Judd said.

Pass it on: Eating lots of Southern-style cuisine, including fried foods and sugar-sweetened beverages, is linked to an increased risk of stroke.