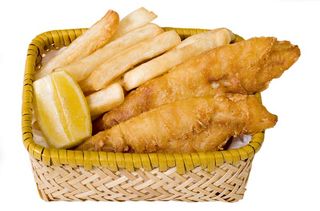 Too much fried fish may contribute to the high rate of stroke in America's "stroke belt," according to a new study.

The results showed that people living in the stroke belt including residents of North Carolina, South Carolina, Georgia, Alabama, Mississippi, Tennessee, Arkansas and Louisiana were about 30 percent more likely to eat two or more servings of fried fish every week than those living in the rest of the country, the researchers said.

And blacks who are known to have an increased risk of stroke regardless of where they live, were more than 3.5 times more likely to eat two or more servings of fried fish per week than whites.

Fried fish, Nahab said, may be contributing to these racial and geographic disparities.

Eating fish can be healthy fish are key sources of omega-3 fatty acids , which previous studies have shown to be associated with reduced risk of heart attack and stroke . The American Heart Association recommends people consume at least two meals containing fish per week.

However, there is evidence that frying fish reduces their amount of omega-3 fatty acids, Nahab said. Frying is also associated with an increase in the food's fat and calorie content.

Nahab and his colleagues examined the fish intake of 21,675 people living in the stroke belt, stroke buckle and rest of the United States.

Overall, just 23 percent of participants ate the recommended two or more servings of non-fried fish per week. Residents of the stroke belt were 17 percent less likely to adhere to these recommendations than people in the rest of the country, the researchers said.

Blacks ate more fish on the whole compared with whites, and they consumed higher amounts of fried fish.

"The differences in dietary fish consumption, and specific cooking methods frying may contribute to the higher rates of stroke among those who live in the stroke belt and among African-Americans," Nahab told MyHealthNewsDaily.

By eating more non-fried fish, especially fatty fish that have higher levels of omega-3 fatty acids, or taking fish oil supplements , some cases of stroke could be prevented, Nahab said.

The study is published online today (Dec. 22) in the journal Neurology. The work was funded by the National Institute of Neurological Disorders and Stroke, the National Institutes of Health, and the Department of Health and Human Services. General Mills provided funding for coding of the food-frequency questionnaire completed by study participants.

Pass it on: While fish are a good source of omega 3 fatty acids, frying fish may reduce levels of these nutrients. Consumption of fried fish may contribute to the increased risk of stroke in the U.S. stroke belt.