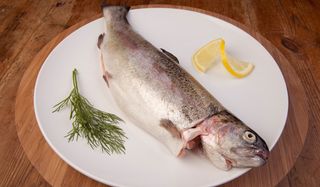 Fish oil can do more harm than good if you take too much and you already have immune-system problems, a new study suggests.

The researchers had thought the anti-inflammatory properties of fish oil might benefit people with inflammatory bowel disease, many of whom have impaired immune systems, said study researcher Jenifer Fenton of Michigan State University. However, the findings in mice seemed to indicate that fish oil supplements in high doses could, instead, make things worse, Fenton told MyHealthNewsDaily.

"There's no doubt that it has these effects on inflammation and immune function," Fenton said of fish oil, "so the question is, 'Is that always a good thing? In this particular model, it was not."

The results underscore the importance of taking supplements in moderation, she said.

Of mice and fish oil

In the study, researchers gave mice four different dosages of docosahexaenoic acid, an omega-3 fatty acid in fish oil . They gave other mice inert substances that would not have an effect.

The mice, all of which had been genetically altered to be more susceptible to bacterial infections, were then exposed to bacteria that increased their risk of developing colon cancer and colitis.

The mice that had received medium and high dosages of the omega-3 fatty acid developed late-stage colon cancer, the researchers found. The other mice did not.

Fenton said the results show a high dose of fish oil beyond what you'd normally get from a healthy diet has the potential to suppress the immune response to a virus or bacteria if you already have a compromised immune system.

And for sufferers of inflammatory bowel disease, high doses of fish oil could increase the severity of inflammation, possibly leading to the development of abnormal and even cancerous cells, she said.

Most people don't get a lot of omega-3 acids in their diets, Fenton said, even though the acids are known to lower triglycerides and reduce the risk of cardiovascular disease. When supplements are taken in moderation to make up for deficiencies, they can be good for health.

But the danger comes when too much is taken by people who don't need supplementation, she said.

How much is too much? A call for regulation

Supplements are not regulated by the Food and Drug Administration, and it's impossible to tell if you're actually getting the dosage you expect from each pill or packet, she said.

"When you purchase the supplement, we don't know what's in there," Fenton said. "So the point is to get fatty acids from foods, because that's where we know there's a benefit in long-term diet studies."

Fenton stressed that the study was done in animals, and that research is still needed into the levels of omega-3 fatty acids in people who have inflammatory bowel diseases.

The study was published Oct. 5 in the journal Cancer Research.