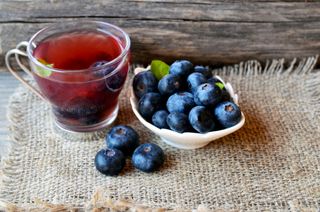 CHICAGO — Drinking a cup of tea or eating a handful of berries a day may help protect against heart disease, a new study suggests.

The research, presented here yesterday (Nov. 10) at the American Heart Association's Scientific Sessions annual meeting, found that daily consumption of small amounts of flavonoids — compounds found in berries, tea, chocolate, wine and many other fruits and plants — was associated with a lower risk of heart disease.

This association (which is not to be confused with a cause-and-effect finding) is not new; previous research has also found a link between flavonoids and heart disease risk. But the new study — one of the largest done to date — adds stronger evidence to the idea that flavonoids may protect the heart, said co-lead study author Nicola Bondonno, a postdoctoral researcher at the School of Biomedical Science at the University of Western Australia. [5 Surprising Ways to Be Heart Healthy]

In the study, Bondonno and her team analyzed data from nearly 53,000 people who had participated in the long-running Danish Diet, Cancer and Health Study, which began in the 1990s. At the beginning of that study, participants filled out a questionnaire with information about what types of foods they ate and how often they ate them. The researchers then tracked the participants' health for more than two decades.

After a 23-year follow-up period, around 12,000 of the participants had developed some sort of heart condition.

The researchers found that people who reported eating around 500 milligrams or more of flavonoids daily had a lower risk of developing ischemic heart disease (where the heart's major blood vessels are narrowed, reducing blood flow to the heart), stroke and peripheral artery disease (where blood vessels in the body are narrowed, reducing blood flow throughout the body). This association was the greatest for the latter, the researchers found.

Bondonno noted that 500 mg of flavonoids is "very easy to eat in one day." You would get that amount of flavonoids from "a cup of tea, a handful of blueberries, maybe some broccoli," she said. They also found that, on average, it didn't make too much of a difference how much more flavonoids healthy people consumed once they passed the 500 mg/day threshold.

The reason flavonoids could have a protective role against heart disease is because of their anti-inflammatory properties, Bondonno told Live Science. Inflammation is a risk factor for heart disease, she said.

The researchers noted that the association between flavonoids and reduced heart disease risk varied for different groups of people. The link between flavonoids and reduced risk of heart disease in smokers, for example, wasn't observed at 500 mg of flavonoids a day; rather, smokers needed to eat more flavonoids for the link to be apparent. Similar results were seen in people who drank alcohol and in men. However, it was in these three groups that the researchers found that flavonoid intake was associated with the greatest reduction in risk.

In their analysis, Bondonno and her team made sure to take people's whole diets into consideration, because people who tend to eat lots of fruits and vegetables (and in turn, consume a lot of flavonoids), tend to have better diets in general, eating more fiber and fish and less processed food, which are all "associated with heart disease," Bondonno said. When they adjusted for these diets in their report, they found that the association between flavonoid intake and reduced heart disease risk was still there, but a bit weaker. In other words, flavonoids may not play as big a role in heart disease risk as a healthy diet would in general. [11 Ways Processed Food Is Different from Real Food]

Further, the study was conducted only in Danish people, and though these results shouldn't be extrapolated, "these kinds of associations have been seen in other populations," Bondonno said.