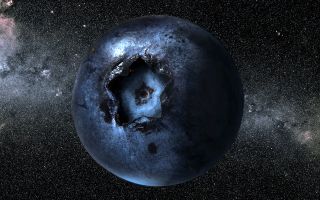 If our planet suddenly turned into an Earth-size pile of blueberries, things would start exploding. This is science.

Specifically, it's the conclusion of a juicy paper submitted to the preprint server arXiv on July 27. (Papers on arXiv have not yet passed through the peer-review process or been published in journals.) The author, Anders Sandberg, a computational neuroscientist with a broad research portfolio at the University of Oxford's Future of Humanity Institute, addresses the problem — originally posed on the website Stack Exchange — in thorough, blueberry-bursting fashion.

Sandberg's paper aims to answer the question, "What if the entire Earth was instantaneously replaced with an equal volume of closely packed, but uncompressed blueberries?" In doing so, Sandberg makes a key assumption: The Earth turns into "big, thick-skinned highbush blueberries" and not "wild, thin-skinned blueberries."

That turns out to be a big deal: The bigger, thick-skinned blueberries would have a lot more space between them when Earth spontaneously transformed into the evenly spaced blueberry pile. And, in Sandberg's model, that space would be filled with air — air that would start doing some very interesting things very quickly. [What If Earth Was 50% Bigger?]

"To a person standing on the surface of the Earth when it turns into blueberries, the first effect would be a drastic reduction of gravity," Sandberg wrote.

Perched on a mushy ground of free-rolling blueberries, you might notice a sensation in your gut like an elevator dropping as your weight dropped by 87 percent, Sandberg wrote. If you weigh 150 lbs. (68 kilograms) on normal Earth, you'd weigh about 20 lbs. (9 kg) on the far-less-dense blueberry planet, Sandberg said in the paper.

That soft, messy, low-gravity blueberry surface might be a fun place to hang out if it lasted. But, Sandberg said, things would start to change — fast.

All that air trapped between the blueberries would rush to the surface as the blueberry pile started to collapse into itself under its own gravitational pressure. Huge bubbles would burst from the surface, flinging matter into space even as the interior of the planet coalesced into a thick blueberry jam.

The effect of the geysers of bubbles combined with the collapsing planetary core would be "the worst earthquake ever," Sandberg wrote. "And it keeps on going until everything has fallen [towards the center of the planet] 715 km [444 miles]. While this is going on, everything heats up drastically [by about 143 degrees along the Celsius scale or 258 degrees along the Fahrenheit scale, thanks to the gravitational energy release] until the entire environment is boiling jam and steam. The result is a world that has a steam atmosphere covering an ocean of jam on top of warm blueberry granita." [What If? 22 Crazy Hypothetical Questions (and their Answers)]

That "granita" would be a hot core of blueberry ice, compressed into a solid by the extreme pressure at the planet's center.

The sky, Sandberg wrote, would still be bluish, with white water-vapor clouds. Any survivors might still be able to spot a dramatic sight: the moon, suddenly released from Earth's gravitational leash, hurtling into space.

There are still a number of open questions yet to explore about blueberry Earth, Sandberg wrote, many of which relate to its chemistry. All that hot blueberry sugar might, under normal circumstances, ferment into alcohol, but there's some chance that all those antioxidants would disrupt the process. [What If Earth Started Spinning Backward?]

Further, he wrote, "Will the moist and deep atmosphere heat up further, or could cloud layer keep the albedo [the level of reflectivity of incoming light] high enough to avoid a runaway greenhouse effect? Will [solar radiation that can destroy water molecules dry out the planet]? Could extremophile bacteria survive and bootstrap an ecosystem?"

As for the value of the paper itself, Sandberg concluded, "One might wonder if this kind of exploration is worthwhile. I believe it is: This is both a pedagogical and amusing way of applying standard planetary science modelling to a system. Given how exotic exoplanets have turned out, the physics of blueberry Earth is actually fairly normal compared to much that is out there."

You can read Sandberg's paper, which is written in fairly accessible language, in full here.