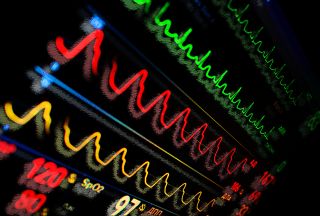 People who experience a rare condition known as "broken-heart syndrome" need immediate medical attention, but often make a quick recovery. But the problem can be particularly deadly if these patients also develop a complication in which their heart can't pump enough blood to the body, a new study finds.

What's more, the risk of death for broken-heart syndrome patients with this complication — known as cardiogenic shock — remains high not only while they are in the hospital, but for years afterwards.

"Beyond the higher short-term mortality, for the first time this analysis found people who experienced broken heart syndrome complicated by cardiogenic shock were at high risk of death years later, underlining the importance of careful long-term follow-up especially in this patient group," Dr. Christian Templin, lead author of the study and head of acute cardiac care at the University Heart Center at University Hospital Zurich in Switzerland, said in a statement.

The findings will be presented at the American Heart Association's Scientific Sessions meeting in Chicago, and simultaneously published in the journal Circulation. [9 New Ways to Keep Your Heart Healthy]

Broken-heart syndrome, also known as takotsubo syndrome, is a condition in which the heart's main pumping chamber, the left ventricle, temporarily becomes enlarged and weakened so that it doesn't pump properly. (The syndrome is named for the odd shape the heart takes when the ventricle becomes enlarged. It resembles a "takotsubo," a Japanese fishing pot used to trap octopuses.) The condition is often triggered by emotional stress, such as the death of a loved one or the loss of a job, according to the Mayo Clinic. But it may also be triggered by physical stress, such as an asthma attack or major surgery.

Symptoms of broken-heart syndrome can resemble those of a heart attack and include chest pain and shortness of breath. But unlike a heart attack, there is no blockage of the heart's arteries, and patients usually make a full recovery within days to weeks, the Mayo Clinic says.

But about 1 in 10 patients with broken-heart syndrome experiences cardiogenic shock, a life-threatening complication in which the heart suddenly cannot pump enough blood to meet the body's needs.

In the new study, the researchers aimed to better understand how patients fare when they develop broken-heart syndrome with cardiogenic shock, and what treatments could help these patients.

The researchers analyzed information from a database of more than 2,000 patients with broken-heart syndrome, called the International Takotsubo Registry. Among these patients, about 200 developed cardiogenic shock.

The study also found that:

Examining factors such as whether a patient with broken-heart syndrome also has diabetes, atrial fibrillation or a physical-stress trigger of their condition may help doctors identify those patients who are at risk of developing cardiogenic shock, the researchers said.

The study also found that patients with cardiogenic shock were less likely to die in the hospital if they were treated with devices that provided mechanical support to their hearts, such as an inflatable device that helps boost blood flow.

"Although these devices should be used with caution, it could be considered as a bridge-to-recovery in patients without contraindications," Templin said.

Future studies are needed to examine the best treatments for broken-heart syndrome patients with cardiogenic shock, both over the short and long term, the researchers said.