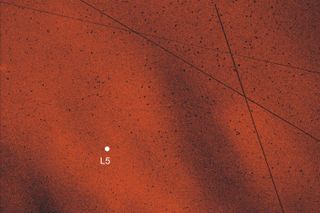 After nearly 70 years of speculation, scientists finally proved a cloud of ghostly dust (imaged here in red) is chasing Earth around the sun. The cloud swirls around a point known as Lagrange point L5 — a gravitational hotspot equidistant from the Earth and the moon.
(Image: © J. Slíz-Balogh)

For all of its emptiness, space is a messy place filled with dust, grease, gas and a whole lot of man-made junk. When that interstellar schmutz gets caught in the gravitational nets of suns, planets and other massive celestial bodies, some interesting things can happen.

Take, for example, the twin balls of space dust known as Kordylewski clouds. First described in the 1950s, these roiling clouds of crud are hypothesized to exist in permanent orbits about 250,000 miles (400,000 kilometers) above our planet — one cloud pushed ahead of Earth and the other dragged behind it — thanks to a unique gravitational arrangement with the moon. Like cosmic tumbleweeds, these grainy dust balls are thought to roll wherever their heavenly hosts roll, picking up stray grit and grime and tiny asteroid chunks along the way, before finally spitting them back out again into the long prairie of space.

Concrete evidence that Kordylewski clouds exist has been hard to come by, for obvious reasons (space is big, and dust is small). But now, a team of Hungarian astronomers thinks they've finally captured one of the clouds on camera — exactly where decades of research predicted it would be. [Earth from Above: 101 Stunning Images from Orbit]

"The Kordylewski clouds are two of the toughest objects to find, and though they are as close to Earth as the Moon, [they] are largely overlooked by researchers in astronomy," lead study author Judit Slíz-Balogh, an astronomer at Eötvös Loránd University in Hungary, said in a statement. "It is intriguing to confirm that our planet has dusty pseudo-satellites in orbit alongside our lunar neighbor."

Caught in a gravity trap

Since their initial discovery, the Kordylewski clouds were hypothesized to exist at two unique gravitational regions known as Lagrange points — special spots in space where a small mass (like a satellite or an asteroid) can orbit at a near-constant distance from two larger masses, like Earth and the moon. (These points are named after the 18th-century mathematician Joseph-Louis Lagrange, who first described them in a paper about the "three-body problem.")

Every celestial system that fits the bill has five Lagrange points (shown in the image above). Three points rest on the invisible line connecting the two big masses, and are too unstable to hold anything in their gravity for very long. The other points — called L4 and L5 — form a stable, equilateral triangle of gravity with the two larger bodies at their vertices.

In the Earth-moon gravitational system, L4 juts out into the space in front of Earth, and L5 trails behind it. Smaller objects caught in these points, including the asteroid 2010 TK7, sit in stable orbits and can potentially remain there indefinitely, barring disturbances from outside forces like solar winds. If the Kordylewski dust clouds exist, you'd find them here at L4 and L5.

In a new pair of studies published in forthcoming November 2018 and January 2019 issues of the journal  Monthly Notices of The Royal Astronomical Society, Slíz-Balogh and two colleagues set out to prove whether the Kordylewski clouds exist — first, from a mathematical standpoint. The team began by running nearly 2 million particle simulations to model the behavior of dust pulled into the gravitational knot of L5.

The simulations showed that a roving dust cloud could indeed exist at L5, though the shape of those clouds would be constantly "changing, pulsing and whirling" as dust particles moved in and out of the region, the researchers wrote. A given particle of dust would probably remain in the cloud for just a few days at a time.

With the theoretical groundwork laid, the team then set out to photograph the whirling ghost of dust for themselves. On a cloudless night, the team trained a telescope onto L5 and photographed the sky using a technique called sequential imaging polarimetry, in which three sequential exposures were taken to measure the faint light scattered from any dust particles that might be there.

The resulting images (like the one at the top of this article) show a haze of red pixels dusted over the black background of space — a clear snapshot of the particle cloud chasing after Earth's orbit.

"We conclude that for the first time we have observed and registered polarimetrically the [Kordylewski dust cloud] around the Lagrange point L5 of the Earth and Moon," the team wrote in their study.

The presence of a similar dust cloud drifting around point L4 remains theoretical, for now. But learning more about these peculiar gravitational traps — and the cosmic dust storms that may lurk there — could help scientists decide whether to send future spacecraft into orbit there.